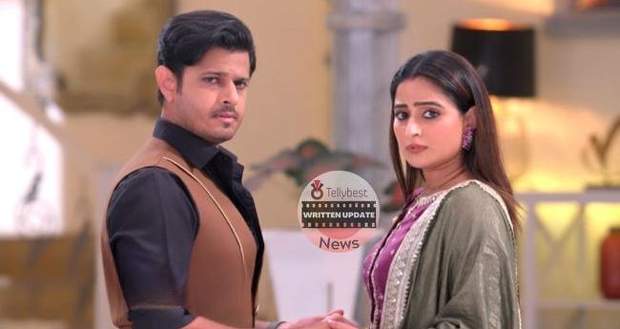 Today's Ghum Hai Kisi Ke Pyar Mein 4th October 2022 episode starts with Ashwini telling Virat that she knows how much trouble he is in.

Ashwini holds Virat's hand as she tells him that she has been worried ever since that girl (Sai) returned.

However, Virat states that he will not let anything happen and will even take Pakhi shopping as their wedding anniversary is coming up.

Later, Virat and Pakhi go to an ornament shop to buy something for Pakhi.

Coincidentally, Sai also comes to the same place to sell her ring.

Virat sees her selling the ring and gets upset which makes him angrier.

Further, Virat intentionally starts talking to Pakhi about their anniversary.

He even goes further by calling Pakhi the best and putting a necklace around her neck with the hidden intention to make Sai jealous.

However, Sai doesn't pay attention to them and leaves after selling the ring while Pakhi goes and asks the manager about the price for the same ring.

Later, Pulkit sees Sai waiting on the road and stops the car to talk to her happily.

However, Sai thinks that he doesn't want to keep any relations with her.

Pulkit tells Sai that he is glad he met her and tells her to get inside the car.

Sai refuses to take the ride offer after which Pulkit gets out of the car and drives in the rickshaw with her.

Pulkit looks at Sai adoringly and tells him that as her brother, he wants to slap her for not contacting him all these years and living away from everyone else.

After some time, Sai helps Savi in gardening while Savi talks about wanting to find her father.

However, Sai recalls Virat and Pakhi in the shop and gets emotional as she starts rubbing the indentation of the ring on the finger.

Pakhi comes to Sai's home and shows her the ring telling her that she knows how much the ring means to her and that she might have been in some financial situation.

However, Sai completely refuses saying that the ring is important to her and starts arguing with Pakhi saying that she does not bring something back into her life that has already been removed.

Pakhi tries to justify herself but Sai rudely tells her to leave.

Knowing how stubborn Sai is, Pakhi just leaves the ring at the table and leaves.

Sai looks at the ring emotionally and throws it into the hole in the garden while crying.

Afterward, Pakhi gets a message from Sai telling her that they should keep their relationship strictly as the patient's guardian and the doctor at all times respectively.

© Copyright tellybest.com, 2022, 2023. All Rights Reserved. Unauthorized use and/or duplication of any material from tellybest.com without written permission is strictly prohibited.
Cached Saved on: Monday 21st of November 2022 04:51:24 PMCached Disp on: Friday 9th of December 2022 04:28:07 AM