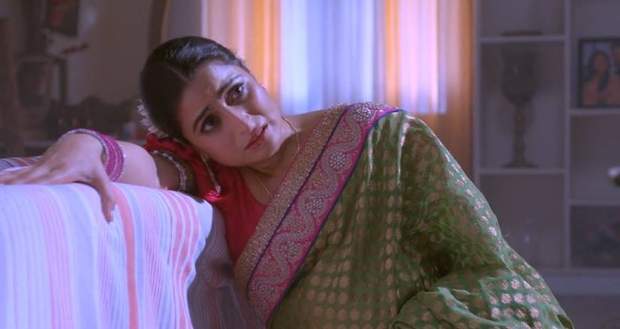 The nurse picks the phone to tell Virat that Sai is in the Operation theatre.

Meanwhile, Bhavani calls Patralekha and finds out that Patralekha is in labour and tells her that they are on the way.

Afterward, Sai calls Virat and he tells her that Patralekha is in labour and asks her to reach home soon.

Just then Virat’s car breaks down where the water is filled to the knees and he starts to wade the water to reach home.

In the meantime, Sai tries to get a cab to the house but fails due to the rain.

Elsewhere, Patralekha is about to fall when Virat catches her in time and puts Patralekha on the sofa.

Ashwini calls Virat who tells her that he has reached home but no ambulance can be reached there.

Later, Sai calls Virat and tells him that there is no way for her to come home.

Virat tells Sai that he can not understand what to do as Patralekha is in labour.

After thinking a long time, Sai asks Virat to deliver the child as they cannot allow them to let anything happen to their child and Patralekha.

Sai motivates Virat to deliver the child as she instructs him.

She tells him to collect the towel and warm water as well as clips.

Meanwhile, Bhavani and Ashwini are regretting leaving Patralekha alone in the house as they are stuck there due to heavy rain.

After a while, Mohit calls Sai who tells him that Virat will be delivering the child as there is no other option and asks them to pray for the child and Patralekha.

Meanwhile, Virat has collected all the items and connects with Sai.

Sai asks him to prepare himself mentally so that he can do it and then put Patralekha on a flat surface.

Step by step Virat follows Sai’s instructions to deliver the baby just like Aamir khan delivers the baby in 3 Idiots while Patralekha struggles with pain.

Just then light goes out and Virat goes to get the lights and candles.

Meanwhile, the whole Chavan family is praying for Patralekha and the child.