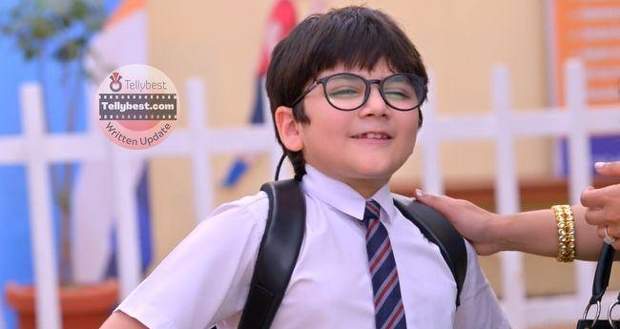 After a while, Savi asks Virat to not go while Vinayak also insists to stay there as Savi is not well.

Elsewhere, Patralekha tries to call Vinayak but there is no network which irritates her and she takes the keys from Mohit as he drives slowly.

Meanwhile, Sai asks Virat about his decision to stay at her place knowing Patralekha’s suspicious nature.

However, Virat tells her that he does not wish to leave Savi in her sick condition as he has already missed so much of Savi’s childhood.

After a while, Virat messages Patralekha about his plans of staying at Sai’s house because of Savi’s illness.

Later, Sai offers to wash Virat’s T-shirt while Savi insists on sleeping on his lap.

Virat feels awkward about taking off his t-shirt but gives it to Sai.

Sai avoids looking at Virat in an undressed condition and hand over the towel to him.

Virat sings a lullaby for Savi and Vinayak while Sai watch him with the children and feels sad for Savi who was deprived of her father for so long.

Meanwhile, Patralekha is driving the car rashly and is trying to call Virat who is not picking up her phone.

Mohit is worried about the accident and tells her to drive slowly, but Patralekha ignores him and continues to drive quickly.

After a while, Patralekha comes running inside asking about Virat and Vinayak from Ashwini but gets to know that he has not returned.

Hearing that, Patralekha gets agitated and calls Virat but he does not pick it up.

Just then she sees Virat’s message and immediately goes back to Sai’s house.

Meanwhile, Sai brings Virat’s T-shirt to the room and watch them sleep for a while.

As she leaves, Virat stops her by tugging at her Sari and pulling her towards him.

Sai reminds Virat about Patralekha but Virat tells her that they are made for each other and they should be together and Patralekha will understand that she is his true love.

However, Patralekha jerks the car to stop coming out of her jealous thoughts of seeing Sai and Virat intimate.

Meanwhile, Karishma comes home to find Sonali and Mohit talking about her and wonders whether Mohit has told Sonali about her affair.

Karishma calls Mohit "Vikrant" and later realises the blunder she has committed.

Virat comes out of the room, hearing the noise and is shocked to see Patralekha.

However, Patralekha sees Virat without T-shirt and all her fears feel like reality.

Sai tries to intervene but Patralekha jerks her hand with force warning her to stay away from her husband.

Virat stops Patralekha from insulting him and asks her to keep a check on her disgusting thoughts.

He takes her inside the room to show Savi and Vinayak sleeping in his room.

Meanwhile, Ashwini and Ninad are worried about Virat and Patralekha's relationship and are in dilemma about favouring Virat or Patralekha.

Patralekha gets irritated hearing about Savi’s illness and blames her for choosing an inappropriate time to get sick.

Virat and Sai look shocked at Patralekha’s view of Savi while Virat calls her a heartless mother.

© Copyright tellybest.com, 2022, 2023. All Rights Reserved. Unauthorized use and/or duplication of any material from tellybest.com without written permission is strictly prohibited.
Cached Saved on: Wednesday 25th of January 2023 01:38:00 PMCached Disp on: Tuesday 31st of January 2023 06:06:05 PM