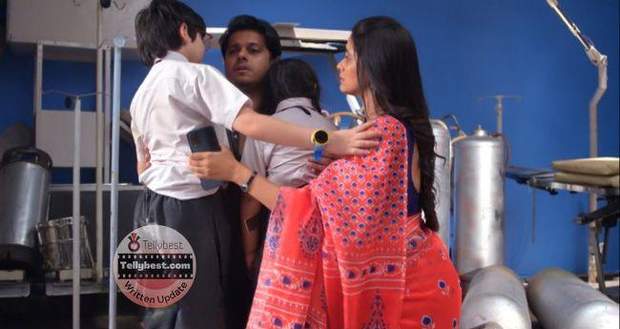 Meanwhile, Bhavani recalls her conversation with Patralekha when she encouraged her to be pregnant.

Pulkit tells Sai to treat Patralekha as she treats other patients and not let emotion affect her.

Afterwards, Sai comes to inform Virat about Patralekha’s successful operation and comforts him saying that they will need to be strong for Patralekha as they will not be able to expand their family.

Virat wants to tell Sai about Vinayak when Bhavani comes there accusing Sai of taking away their family's happiness just like she did with she took away their Veenu from them and sacrificed his life.

Sai tells her to not cross her limits just because she is in pain.

Sai's tears begin to seep hearing about Veenu and tell Bhavani she cannot measure the pain that she has embedded inside her at the loss of her son and how she wishes every day to turn back time and not board that bus.

Before the argument could escalate Virat stops Bhavani from talking this way a time like this when Bhavani accuses him of siding with the woman who took away their heir.

Virat gets agitated and tells them that Veenu is not dead but alive.

Just then Vinayak comes there asking Virat what is he talking about him.

Sai who has looked hopeful and shocked for a while, misunderstands Virat thinking he is talking about Vinayak.

Vinayak asks Sai to make her mother better so she does not get ill from time to time.

After a while, Patralekha wakes up and panics thinking about Vinayak still being kidnapped but Vinayak goes to her and calms her.

He also tells her that Sai, Sahiba and Virat saved them from that bad uncle.

On being thanked, Sai tells Patralekha that Vinayak is dear to her like Savi.

After a while, Patralekha asks to be taken home but Virat tells her that she will have to stay here for a few days to recover.

Hearing that, Patralekha gets angry and tells Virat that he has not saved her life but has killed her by taking away her right to be a mother.

She becomes inconsolable thinking about never becoming a mother and having a family of her own.

Seeing Patralekha lash out, Sai gives her a sedative to cool her.

Later, Sai is writing something on charts in Patralekha’s room when Virat decides to tell Sai about baby Vinayak who is still alive.

Seeing Sai leave, Virat stops her and tells her with happiness that their son Vinayak is alive.

Initially, Sai misunderstands Virat but becomes tearful after understanding the real meaning of that statement.