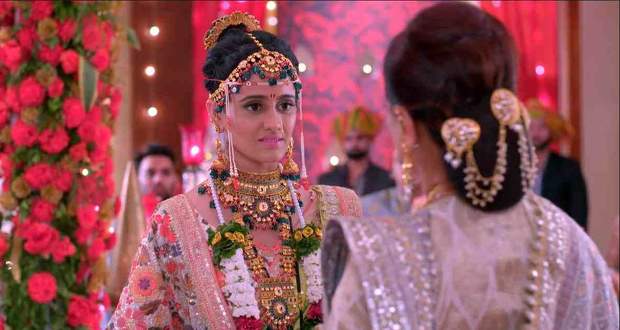 Today's Ghum Hai Kisi Ke Pyar Mein 5th May 2022 episode starts with Sai telling Bhavani that she has decided to change her name.

Virat is pleased to hear Sai’s announcement and tells Bhavani that Sai has agreed to change the name and she will be joining the kitchen again then what else does she want.

Bhavani only wants Sai to give up her career and keeps giving unreasonable arguments to get her wish.

Sai chooses her career whereas Virat feels hurt and questions her about her love for him.

Sai tells him that she loves him more than life but cannot let go of her father’s wishes and her identity.

Bhavani tells her that she will have to leave the house and never return.

Ashwini asks Sai to think of Virat and their love and happiness.

Sai tells Ashwini that she has thought this through and is not ready to marry on conditions.

She is also assured that Virat will support her in her decision.

Sai unties the Gathbandhan knot while Virat looks at her shocked and asks her of her doing.

With tear-filled eyes, Sai leaves the ‘Mandap’ while Bhavani and Patralekha rejoice in their victory.

Just then, Bhavani’s voice brings Virat out of his reverie and he is happy that Sai has still not answered.

Virat Answers Instead of Sai

Virat chooses for Sai to be the daughter-in-law and asks Sai to have faith in him.

Bhavani praises Virat for being the man.

Later they complete the last ‘Phera’ but Sai's smile has vanished.

Sai is not sure of Virat’s decision but stays silent.

Bhavani is feeling happy and victorious and blesses them.

Later, Ashwini hugs her and blesses them with togetherness.

Sai expresses her happiness at being Virat’s wife but is sceptical of Bhavani’s condition.

Sonali tells Sai that it is not just a condition but a lifestyle and she should get used to it.

Shivani and Rajeev feel sad for Sai whose happiness is shadowed by Bhavani’s condition.

Meanwhile, Bhavani is enjoying Sai’s defeat and tells Sonali that Sai needed disciplining which she provided by putting forward this condition.