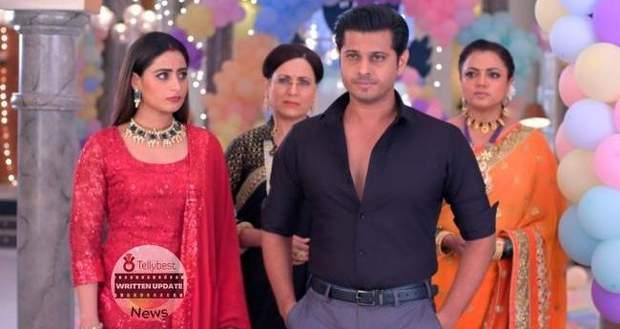 As soon as Savi is asleep, Sai starts packing their luggage while Usha tries to stop Sai by saying that Savi will be very upset to see herself in Kankoli when they wake up.

However, Sai states that it is for the best and keeps continuing with her work.

Just then, Usha gets a call from Jagtap who asks her where they are going.

Usha tells Jagtap everything and wishes that he can stop Sai.

On the other hand, Pakhi gets ready in a beautiful red outfit as she looks at herself in the mirror and thinks that today is the perfect day to confess to Virat about her feelings.

Further, the Chavan family gets ready to celebrate as all the family members congratulate Vinayak.

Bhavani jokes that Virat and Pakhi should go for their honeymoon while Vinu says that they will go on the trip after his wish is completed.

The family gets curious while Vinayak blows out the candles and brings the adoption papers that Savi had given Virat.

Vinu gives the documents to Virat and tells him to complete his wish by signing the papers.

The family gets shocked as Vinu requests Virat to sign the papers.

Just then, Jagtap comes there in his drunken state and tells Virat that he has something to discuss with him.

Omkar comes forward and tries to kick Jagtap out of the house who sits down on the floor to talk to Virat.

Elsewhere, Sai calls the landlord and gives him the keys to the house while informing him that she is going back home.

The man tells Sai that it is not good for them to travel in such weather and suggests they go in the morning.

The thunderstorms echo in the background as Sai says that they have to go and tells Usha to sit in the Rickshaw.

At the Chavan house, Harini takes Vinu upstairs while Virat runs to Jagtap and starts beating him up.

Jagtap requests him to forget all the enmity they have to listen to him for two minutes as he has something important to tell him.

However, Virat keeps punching him as he states that Jagtap is the reason for Samrat's death.

Further, Virat kicks Jagtap out of the house and closes the door as he goes to his room angrily.

Meanwhile, Bhavani wonders what Jagtap wanted to talk to Virat about.

© Copyright tellybest.com, 2022, 2023. All Rights Reserved. Unauthorized use and/or duplication of any material from tellybest.com without written permission is strictly prohibited.
Cached Saved on: Monday 21st of November 2022 04:17:52 AMCached Disp on: Saturday 10th of December 2022 01:25:48 PM