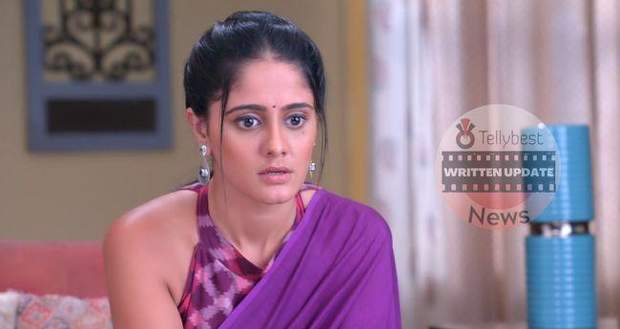 A bill receipt fallen on the carpet catches Virat’s eyes which he reads picking up.

Patralekha gets worried as Virat asks her if she had purchased another ring from the jewelry shop.

The mobile falls down from Patralekha’s hands and Virat sees Sai’s profile opened on WhatsApp.

Virat listens to the voice message sent by Sai in which she says that she is not the old Sai anymore who will accept the ring again.

The expressions change rapidly on Virat’s face from calm to thunder and he roars at Patralekha for being stupid and thinking of Sai when he doesn’t want any relationship with her.

Patralekha says that she purchased the ring again and gave it to Sai who denied accepting it.

At night, Sai is silently crying as the scene from the jewelry shop flashes before her eyes and massages her aching head.

Meanwhile, Virat’s mind goes back to the memory lanes where he sees Jagtap and Sai together and his pain multiplies.

Patralekha is sadly turning and tossing on her side of the bed.

Virat talks to Patralekha about shouting at her earlier.

Patralekha shares that she is worried about the fact that in the shop Virat pampered her to make Sai jealous.

As Virat doesn’t meet her eyes properly and denies the fact, Patralekha angrily states to him that she can tolerate anything but not being used by him.

The next day, Bhawani asks Ashwini to drop Vinayak at Sai's place as Virat, Patralekha, and Mohit none of them are available.

Unwillingly, Ashwini goes to Sai’s place where Savi opens the doors for them.

Vinayak introduces Ashwini as his grandmother to Savi who in turn hugs Ashwini calling her “Ajji” (grandmother in Marathi).

Ashwini asks Savi to not call her “Ajji” and detach the little girl from herself as she remembers to whom she belongs.

Vinayak and Savi go inside when Sai also come there to receive Vinayak.

Sai comments to Ashwini that how much she has changed as well that today she stopped an innocent little girl from calling her grandmother just because she hates Sai.

Meanwhile, at Chavan's house, Harini is talking to a friend to hire a photographer for building her portfolio for which she needs money.

However, Harini gets into an argument with Bhawani who is schooling her to speak respectfully to elders.

Further on, Sai asks Vinayak to kick the football while she supports him.

Vinayak kicks the football hard which straight goes into Virat’s hands who has come to take Vinayak back home.

Being too happy, Virat holds Sai’s hands thanking her, however, the missing ring on her finger brings him back to reality.

© Copyright tellybest.com, 2022, 2023. All Rights Reserved. Unauthorized use and/or duplication of any material from tellybest.com without written permission is strictly prohibited.
Cached Saved on: Monday 21st of November 2022 01:26:21 AMCached Disp on: Tuesday 6th of December 2022 12:48:23 PM