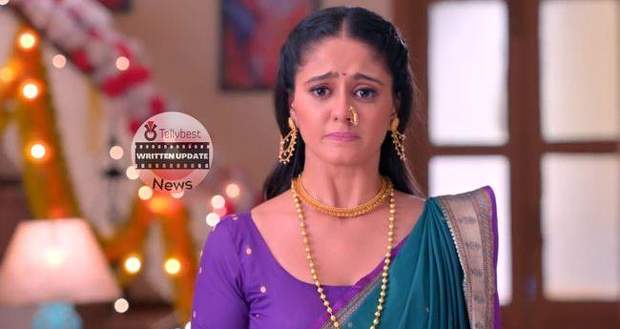 Today's Ghum Hai Kisi Ke Pyar Mein 5th September 2022 episode starts with Sai arguing with Hariya to let her inside and help while he states that the midwife is already inside and will deliver the child.

On the other hand, Gulabrao is still talking to his goons while saying that he will take revenge on Sai at any cost.

Back at Hariya's house, Sai takes full responsibility and manages to get inside with the condition that she will get kicked out if something happens to Gayatri or the unborn child.

At the Chavan house, the family members are gushing thinking that Pakhi and Virat are going to the Maldives but Vinu comes there and reveals that they are going to Kankauli to continue his treatment there.

The family gets confused while Pakhi and Virat inform that Vinu's doctor told them that the treatment from the doctor at the camp is showing improvements in Vinu's conditions.

Back in Kankauli, Sai keeps recalling her pregnancy when she gave birth to Savi while she makes Gayatri stand up going against the midwife's orders.

The midwife calls Gulabrao and tells him that she is sure Gayatri and her baby will not make it through the pregnancy.

Back in Chavan's house, Virat brings ice cream for Pakhi and thanks her for agreeing to go to Kankauli while Pakhi tells him that Vinu is their child and she is willing to do everything for him.

At the same time, Sai gives encouraging words to Gayatri and manages to deliver the baby which shocks everyone.

Vinu calls Savi and tells her that he is coming to Kankauli with his family for the treatment of his legs.

Just then, Pakhi comes to Vinu's room and takes the call to talk to Savi's mother and make an appointment.

However, Savi tells her that they don't need an appointment and can come to their house anytime.

Further, Pakhi requests to talk to Savi's mother but Savi replies that her mother isn't home and gives the phone to Usha.

Pakhi talks to Usha while Usha tells her that she feels as if they have talked to each other.