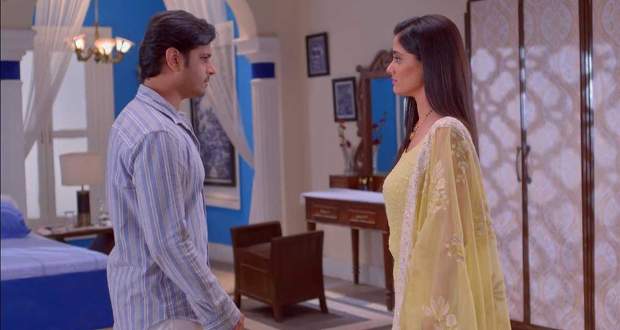 However, Patralekha is adamant about not letting Sai do Virat’s physiotherapy.

Ashwini is unable to see Virat in pain and permits Sai to do Virat’s physiotherapy.

Meanwhile Sunny tries to convince Virat to give Sai a chance as she loves her so much.

Virat reminds Sunny how Sai, in her love, has divorced him, some time ago.

Remaining unconvinced, Virat also tells Sunny that Sai’s nearness is a cause of pain.

Just then, Ashwini calls Sunny to bring Virat in for Physiotherapy.

Ashwini explains her helplessness at not finding anyone other than Sai.

However, Virat refuses to get treated by Sai but Sai asks him to treat her like a professional instead of his wife.

Later, Ashwini also tries to convince Virat and he agrees after some arguments.

Afterwards, Sai explains the procedure to Virat and ask him to cooperate.

Virat and Sai quietly struggle to maintain a rapport while Sai begins his therapy.

After a while, Virat feels the effect of therapy and relaxes.

Meanwhile, Patralekha is in her room while Samrat comes near her trying to be romantic however, Patralekha tries to escape him.

Samrat questions her worried face and asks her to let go of Virat and Sai's problems and focus on them instead.

Meanwhile, Sai finishes giving therapy to Virat and asks him to sleep.