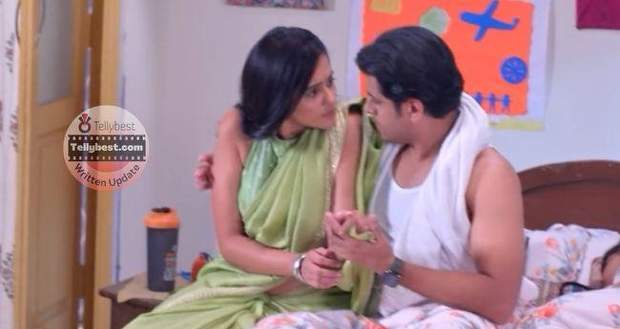 Today's Ghum Hai Kisi Ke Pyar Mein 6th December 2022 episode starts with Virat accusing Patralekha of being a bad mother while Patralekha gets angry at Virat for favouring Savi over her.

She accuses Savi of being the root of the problem and she hates her.

Just then Vinayak comes out hearing the noise and becomes happy to see Patralekha.

Ignoring Patralekha, Virat tells him to get his bag so they can leave.

Later, Sai vents her anger and frustration on things when Usha comes there and tries to comfort her.

Sai tells her that she has anticipated this situation from the beginning and it is only happening because Savi’s truth has come out and now no one can do anything to anyone.

At home, Ashwini and Ninad are waiting for Virat and Vinayak and ask them what has taken them so long.

Vinayak tells them about Savi’s sickness which worries Ashwini.

However, Virat assures her that everything is alright and goes to sleep in Vinayak’s room.

Later, Patralekha tells Ashwini that she is not in the wrong, and since Savi came into their life, she and Vinayak have become invisible to Virat.

She tells Ashwini that it is her right as a wife to come first in Virat’s life no matter what.

Ninad tells Patralekha that she should talk to Virat about this matter when he cools down.

After a while, Ashwini tells Ninad that they will have to talk to both Patralekha and Virat and sort out problems between them.

In the morning, Virat gets ready and goes away before Patralekha can wake up.

Later, in the office, Virat tries to talk to Sai but Sai puts boundaries between them.

She tells him that she has joined the police to help many officers like her father so that no other Sai loses her father on her watch.

She also tells him that she does not want to make her place of work a battleground for their personal matters.

Thinking about Patralekha, Sai tells him that she does not want to be sandwiched between him and Patralekha nor is she, anyone, to him.

Elsewhere, Virat comes home with Vinayak where Ashwini asks him about Savi’s health.

Later, Patralekha asks Vinayak about his project when Vinayak shows his gold star for the project.

Meanwhile, Savi also shows Sai her gold star and tells her that they will soon be going on the school picnic.

Vinayak and Savi tell Sai and Virat individually that their parents will go on a picnic with their children.

Hearing the date for the picnic Sai gets stunned and drops the glass on the floor.

She is scared of what Patralekha might do if they are together on 8th December.