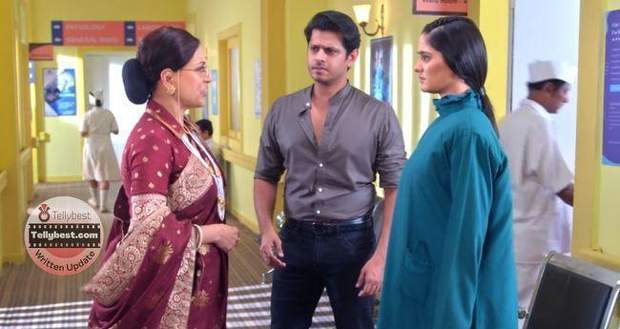 Sai becomes happy and goes to hug Vinayak who just woke up from sleep.

Sai tells Vinayak that she and Vinayak are his real parents and he can call her Aayi now.

Just then Patralekha wakes up and asks Virat if what she has heard is true.

Virat happily tells Patralekha that Vinayak is the same child she has carried for nine months.

Patralekha comes to Vinayak and happily hugs him saying that God has returned her Vinayak when he has taken her ability to give birth to another child.

Sai tells Patralekha that Vinayak is her son and she wants her back.

Patralekha gets furious and tells Virat to tell Sai that Veenu is her and Virat’s child whom she has raised and he belongs to her.

Sai tells Virat that last time also he did not support her but he should support her.

Virat tells Patralekha that Vinayak is Sai’s child and she has a right to keep it.

Patralekha becomes hysterical and tells Virat that no one can take away her child from her and if he tries then she will kill herself.

Virat tells Patralekha to not talk nonsense and accept that Vinayak is Sai’s son.

Patralekha's hysteria grows upon hearing Virat and she leaves the room telling Virat that she will prove to him that she is serious.

Before Virat can understand, Patralekha jumps out of the window and dies.

Virat wakes up in cold sweat and looks for Patralekha and feels relieved to see her asleep.

Later Virat comes out to see Sai feeding Vinayak while telling him to eat for the sake of his mother.

Meanwhile, Virat's inner self questions Virat about keeping the news to himself and how will it make it any different from Sai.

Virrat argues that Sai and his situation are extremely different as he has to consider Patralekha who has just lost her ability to bear children and will not be able to suffer Vinayak’s loss as well.

Virat also knows that he knows Sai's reaction and the moment she will find out she will take Vinayak with her and away from him and Patralekha.

Sai’s voice brings Virat out of his reverie while Sai tells him to tell Patralekha that she is really blessed to have Vinayak as her son who loves and cares for her.

Virat apologises to Sai for everything he made her suffer in life.

Sai misunderstands Virat and tells her to not bother about Bhavani as she has a habit of saying bitter things whereas Patralekha is only angry at the moment and said all those things in the heat of the moment.

However, Virat tells her that he is apologising for all that he has said or not said to her and for making her suffer.

Sai tells him to let the past go as it cannot be changed.

Seeing Sai go, Virat tells her to forgive him for keeping such an important truth from her about Vinayak whom she had been pining for years.

He tells her that he cannot risk Patralekha’s reaction who might kill herself on being separated from Vinayak.

© Copyright tellybest.com, 2022, 2023. All Rights Reserved. Unauthorized use and/or duplication of any material from tellybest.com without written permission is strictly prohibited.
Cached Saved on: Wednesday 25th of January 2023 10:00:19 AMCached Disp on: Sunday 5th of February 2023 03:11:38 AM