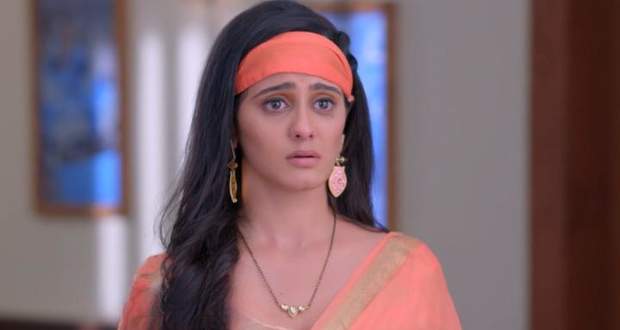 Today's Ghum Hai Kisi Ke Pyar Mein 6th July 2022 episode starts with Virat telling Sai that circumstances were not in their hand and he had to give in and use Pakhi for the procedure.

Sai tells him that how could he be so naive and not see that it was all planned from the beginning why else would Patralekha be preparing her body for surrogacy.

Virat tells Sai to not be too cynical and stop blaming Patralekha for everything.

Meanwhile, Geeta shames Patralekha for doing this to her own family member.

Patralekha tells her that all she wants was to be a surrogate for Sai’s child and Sai is not thinking right since her miscarriage and doubts everyone.

Patralekha also tells Geeta that she is a widow and this is her only chance to feel what motherhood is like.

Meanwhile, Virat asks Sai what could be Patralekha's motive behind all this.

Virat gets annoyed at Sai’s stubbornness and tells her that she is being unreasonable now that things have not gone according to her plan.

Sai tells Virat that Geeta was manipulated into not coming to the hospital and now she thinks that her attack was also planned and she thinks that Patralekha is behind all this.

Virat gets angry at Sai’s allegations and tells her that he has had enough and he will not listen to any more of her complaints as he is fed up with all this.

In the meantime, Patralekha is manipulating Geeta and goes down on her knees to begs Geeta to keep her secret.

Just then Yogesh comes in and is shocked to see Patralekha.

Sai comes to Virat and questions him for not analysing the situation as a police officer.

Later, Sai comes to Patralekha’s room and accuses her of playing games to get her wish.

After a while, Virat comes in and thanks Patralekha for helping them at the last moment.

Just then Bhavani comes in and gets angry at Sai for not letting Patralekha rest.

After a while, Geeta and Yogesh lie about seeing Patralekha before.

Virat apologises to Geeta and Yogesh for wasting their time and shames Sai for insulting Patralekha.

Bhavani angrily tells Sai that instead of being thankful to Patralekha, she is putting allegations on her of conspiracy.

Bhavani also tells her that the attack on her could be because of Jagthap who has dared to come to their house.

© Copyright tellybest.com, 2020, 2021. All Rights Reserved. Unauthorized use and/or duplication of any material from tellybest.com without written permission is strictly prohibited.
Cached Saved on: Saturday 1st of October 2022 01:39:36 AM