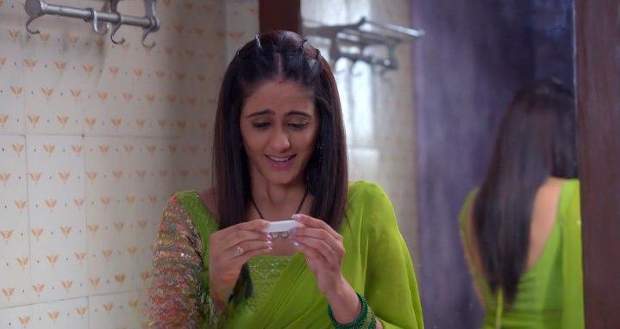 Jagthap celebrates hitting Samrat while Sai tries to stop him.

Jagthap hits Sai while Sai tells him that she is pregnant.

After giving the news some thought, Jagthap tells Sai that they will abort the child soon.

Sai gets pushed and lies on the seat, and using the opportunity sends the message to Virat.

Virat immediately leaves after seeing Sai’s message and is waiting on the road for Jagthap.

Jagthap tries to run over Virat too but Samrat shoots at his tyre and makes him stop.

Jagthap locks Sai in the car and gets down to fight with him.

Sai tries to tell Virat about Samrat but her voice couldn't reach Virat due to locked windows. She gets herself free and breaks the car window to get out.

Virat is busy beating Jagthap when Sai tells him about Samrat.

Jagthap flees while Virat is distracted but Virat shoots at his leg as his team arrives. Virat orders them to capture him and goes to help Samrat.

Meanwhile, Mansi is showing Bhavani and Ashwini, Samrat’s and Patralekha’s photos and shares her happiness at their togetherness.

Sonali takes the pic from Mansi to see it closely but it slips from her hand while returning it and crashes into many pieces.

Meanwhile, Sai and Virat find Samrat and take him to the hospital.

On the other hand, Patralekha is getting ready and has decorated the room to welcome Samrat and plan a romantic night.

Elsewhere, Samrat is talking to Virat about his childhood as if he is not going to make it alive.

The hospital is far and Virat is driving fast while Samrat asks Sai to tell her child about him.

In the meantime, Karishma comes to Patralekha and praises her glowing face and beautifully decorated room.

In the car, Samrat asks Virat to take care of Mansi and tells him about Patralekha who is waiting for him.