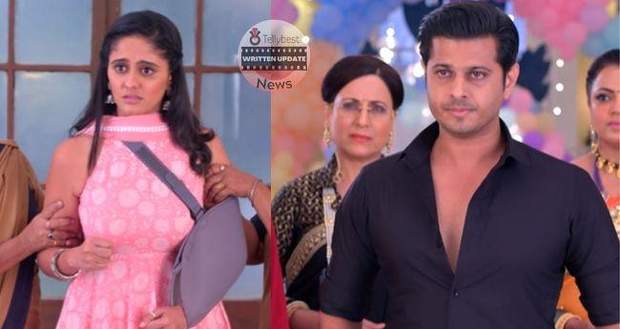 Today's Ghum Hai Kisi Ke Pyar Mein 6th November 2022 episode starts with a drunk Jagtap getting a call from a Nagare who informs him that Sai is leaving the house.

He cuts the call, starts screaming Chavan, and gulps a little more alcohol.

Meanwhile, Sai is seen carrying her luggage when she hears Vinayak call out to her outside the bus station.

Vinayak asks her how she could go but it is not Vinayak but another child who asks Sai for money.

On the other hand, Virat comes out of the Chavan house, after he hears Jagtap blubber about Sai & Savi drunkenly.

Virat gets on top of him & starts punching him.

Meanwhile, Sai gets stopped by a lady who asks her for a bottle of water.

However, the lady asks Sai suddenly why she is leaving the town and says it is a wrong decision.

Sai gets shocked and starts screaming to leave her alone when she realizes the lady was just her imagination.

Sai loses control when she imagines a crowd forming around her that chants she is doing wrong by leaving the town.

Outside the Chavan House, Virat punches a drunk Jaghtap black & blue while Jagtap asks Virat whether he knows who Savi's father is.

Virat thinks Jagtap is mocking him but the ground beneath him shakes once Jagtap tells him that Savi is his daughter.

Stating that Sai only loved one man all her life (Virat), Virat is a loser not to even recognize his daughter.

Jagtap's face oozes blood while he sits down on the ground & asks Virat why he didn't adopt Savi when she asked him to.

Virat says Sai couldn't ever be pregnant while an irritated Jagtap there's no trust inside of him for her.

Virat's eyes well up with tears as he immediately pulls up his car and recalls the moment when the doctor had said if Sai could be a mother, it would be a miracle.

Meanwhile, Patralekha worries about Virat leaving without informing her when Vinayak comes to her with orange juice.

He informs her that he saw Virat with Jagtap and was shouting at him.

Vinayak then brings up Savi's mention & asks Patralekha why they cannot keep her since their house is so big.

On the other hand, Virat gets enraged at himself and beats his hands against the steering wheel, screaming he couldn't even hug Savi when she was begging to find her father.

He then calls Sai but she cuts his call immediately.

Hearing the noise outside the bus station for a second, Virat resolves to get to Savi fast before he loses her completely.

© Copyright tellybest.com, 2022, 2023. All Rights Reserved. Unauthorized use and/or duplication of any material from tellybest.com without written permission is strictly prohibited.
Cached Saved on: Monday 21st of November 2022 12:57:40 AMCached Disp on: Saturday 10th of December 2022 01:27:20 PM