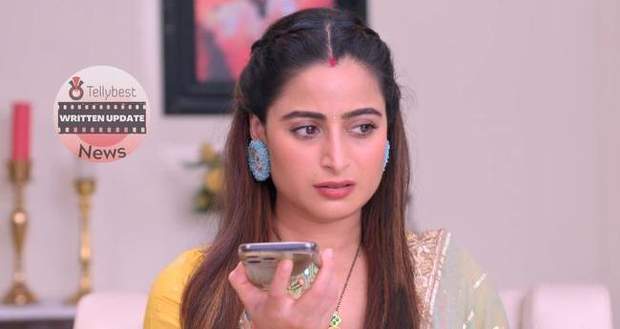 Today's Ghum Hai Kisi Ke Pyar Mein 6th October 2022 episode starts with Sai asking Virat about Vinayak's medical history and telling him that she would get back to him when she needs more questions answered.

Meanwhile, Vinayak and Savi are discussing Savi’s stay in Nagpur and how they will install the Vinayak trophy on the shelf when he wins the race.

Seeing Savi's special dresses Vinayak tells her that she should dress on their parent's anniversary while Sai tells him that this dress is for when she will meet her father.

Later Virat takes Vinayak back home while Sai tells Savi to start studying while she looks for jobs.

In the meantime, Bhavani is getting ready to visit the orphanage with Patralekha and Virat to inaugurate the medical wing.

At the same time, Usha tells Sai about the orphanage needing a doctor and that she should apply there.

Patralekha asks the manager of the orphanage to call the doctor and suggests inaugurating the medical wing by that doctor and Virat.

After a while, Patralekha, Virat and Bhavani are shocked to see Sai as an orphanage doctor.

Bhavani gets angry to see Sai and tells the manager to not appoint Sai as a doctor because she is unfit.

Virat and Bhavani talk in private and Virat convinces Bhavani to let Sai work in Orphanage.

However, Sai has already left by the time Virat and Bhavani return with the decision.

Virat goes to convince Sai to take the job and tells her that the orphanage needs a doctor like Sai for its children are just like Vinayak.

Virat tells Sai that she is a good doctor and she will get a job easily elsewhere but children like Vinayak will be better served with her as the doctor.

He also tells Sai that Vinayak would have benefited from the medical help if it was available when he was living here.

Sai is shocked to hear that Vinayak is adopted and praises Virat for his unprecedented decision.

Meanwhile, Bhavani is angry at Virat for considering Sai as an orphanage doctor and tells Patralekha to talk some sense into Virat and not let Sai come back into their life.

She also reminds Patralekha that Sai is Virat’s first wife and in long run, Sai will become a complication in their relationship.

Meanwhile, Virat tells Sai how Vinayak gave him purpose and new life after he adopted him.

Virat also tells them that Vinayak is unaware of the truth and he wants to keep it that way.

Later, he requests Sai to take the job so that she can help several other children like Vinayak.

However, Sai is curious to know how Vinayak and Virat met on the first day.

© Copyright tellybest.com, 2022, 2023. All Rights Reserved. Unauthorized use and/or duplication of any material from tellybest.com without written permission is strictly prohibited.
Cached Saved on: Monday 21st of November 2022 07:41:41 AMCached Disp on: Wednesday 7th of December 2022 03:34:54 PM