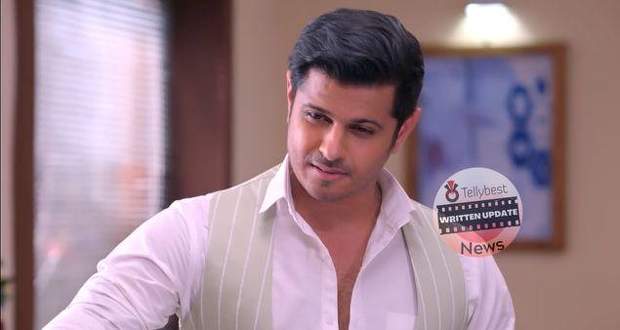 However, Patralekha tells her that she had never been to their village so it is not possible.

Patralekha asks them if it is ok if they come for Vinayak’s treatment to their door.

Usha tells them that they are welcome anytime.

Later, Patralekha is praising Savi to Vinayak when Virat comes in asking them what they are talking about.

Both mother and son tell him in unison that it is their secret and asks him what has he brought in the bags.

Virat hands over the gifts to Patralekha along with the neck pillow for her.

Patralekha feels happy at Virat’s thoughtful gift and thanks him.

On the other hand, Doula comes out with good news and tells Hariya that Sai has saved his wife and his daughter.

After a while, Sai comes out with Hariya’s daughter and tells everyone that they need the hospital badly for Hariya’s wife's life would have benefited from the operation instead of struggling to have a normal delivery.

Gulab Rao feels agitated at Sai’s success and thinks of finding a way to put her in place.

On the other hand, Virat tells Patralekha that his 15-day leave has been approved and he has booked the staff quarter.

Virat is thanking Patralekha for convincing everyone to let them go to Kankauli when Mohit comes to her room looking worried.

Meanwhile, Sai returns home to find Modak prepared and goes to eat them when Savi tells her that these Modaks are for Vinayak who is coming to them for treatment.

In the meantime, all the Chavan's are worried about office problems that will require Patralekha’s presence.

Mohit asks Patralekha to postpone her trip as the client is suing them for price raise and only she can handle this matter.

Later, Savi happily shows Sai the decorations that she has installed to welcome Vinayak and tells her that Vinayak can stay with them as well.

Meanwhile, Patralekha tells Mohit to handle matters on his own as she needs to be with Vinayak.

Omi offers to do an out-of-court settlement which they both disapprove of.

Later Bhavani asks Patralekha to postpone the trip as her company needs her.

Meanwhile, Savi talks about having a father like Vinayak’s father who is brave as well as a police officer.

Elsewhere, seeing Patralekha conflicted about the office and their trip, Virat encourages her to attend to office matters and then she can join them at Katkauli.