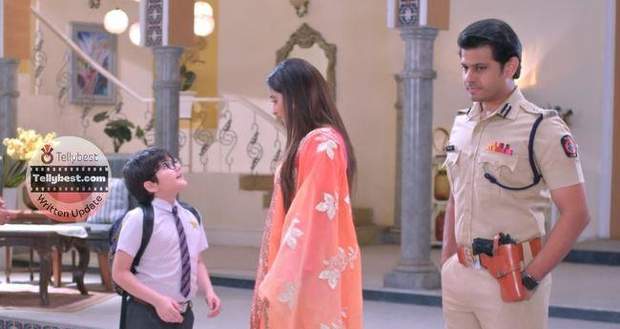 Today's Ghum Hai Kisi Ke Pyar Mein 7th December 2022 episode starts with Savi talking about the picnic excitedly and telling her the date of the picnic which shocks Sai.

On the other hand, Virat excitedly suggests to Vinayak some games that they could play there while Patralekha also makes some suggestions.

In the meantime, Savi tells Sai to buy some clothes for all four of them (Virat, Vinu, Sai and Savi) while Sai looks at her in a sad state.

Elsewhere, Virat tells Patralekha that she will not go on a picnic with them.

In the meantime, Sai also tells Savi that she cannot go on a Picnic as she has joined the course that starts on 8th December.

Meanwhile, Patralekha argues with Virat for stopping her whereas Virat tells her that he does not want him to repeat last night's spectacle at the picnic too.

Patralekha gets angry and reveals about him being shirtless at Sai’s place.

Virat gets embarrassed while Bhavani questions Virat about being shirtless.

Virat looks furious at Patralekha and repeats once again that he had to take off the shirt as it got dirty with vomit.

He tells her that this is precisely the kind of scene he wants to avoid at school in front of his children.

Meanwhile, Sai convinced Savi to not go on a picnic but feels sad for making her sacrifice her happiness.

Later, Ninad and Ashwini come to Virat to make him understand his behaviour with Patralekha and how it is affecting his relationship with her.

Virat tells him that it is Patralekha's fault that she is acting out of jealousy and insecurity.

Hearing the previous night's debacle, Ashwini reminds him that he behaved exactly the same way when he had seen Sai’s friend Ajinkya in her room.

Meanwhile, Usha comes to Sai telling her that Savi has not eaten anything and tells her to let her go to the picnic.

Sai reminds her that only the previous night Patralekha created a scene and she does not want her to repeat the drama in front of others, especially on 8th December.

Later, Patralekha is sitting alone crying while looking at the wedding photo when Virat comes to talk to her.

However, Patralekha is still feeling hurt and taunts Virat for not talking to her properly and with respect in the past few months and reminding him about the number of fights they had.

She reminds him that a few months ago they were the ideal couple of the family who was quoted everywhere but now they have taken their fights out of the bedroom.

She tells him that he has demeaned her in front of the family not only as a wife but as Vinayak’s mother by labelling her uncultured and unfit mother.

Realising his mistake, Virat tells her that he should not have behaved this way with the most important person in his life.

However, Patralekha rebukes his idea of being an important person and tells him that his actions do not support his words and they feel like a curse to her.

She also tells him that it is Sai who is most important to him and who has always been there between them.

On Virat's denial, Patralekha asks him who would he save between her and Sai if he can only save one whether it will be his wife or the mother of his daughter.

© Copyright tellybest.com, 2022, 2023. All Rights Reserved. Unauthorized use and/or duplication of any material from tellybest.com without written permission is strictly prohibited.
Cached Saved on: Wednesday 25th of January 2023 01:50:20 PMCached Disp on: Monday 6th of February 2023 11:56:11 PM