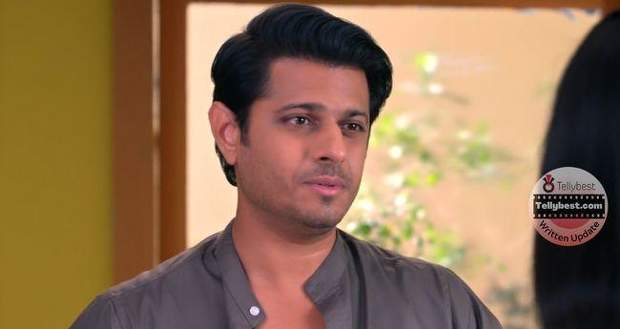 Meanwhile, Ashwini tries to feed Patralekha and tells her that she will have to accept fate as it is not possible to fight it.

Patralekha looks dejected and complains to her for saving her life.

Just then Virat comes there and asks to be alone with Patralekha.

Virat tells Patralekha that no pain in this world is big enough to sacrifice one's life for.

Patralekha is upset to think that she will not be able to give him children.

He also tells her that their son is so worried for her that he has stopped eating and is asking when his mother will get well.

Virat tells Patralekha to promise her to never hurt herself for both his and Vinayak’s sake.

Patralekha looks happy to hear Virat and promises Virat while Vinayak comes to her and feeds her soup.

Meanwhile, Sai asks Karishma about her relationship with Mohit and confronts her about the guy who just dropped her.

Karishma gets angry and rudely tells Sai to mind her business and not try to hurt her relationship with Mohit as she has with Virat and Patralekha.

Seeing Sai being unaffected by her defence technique, Karishma gets worried about being exposed to the family.

Meanwhile, Sai decides to take Jagthap's help to find out about Karishma’s boyfriend.

However, Jagthap's jovial mood gets on Sai's nerves and she rudely tells him to do the job and stop talking so much.

Meanwhile, Jagthap becomes happy at Sai's call and tells his friends that he will give them an ice cream treat.

In the meantime, Virat comes to Bhavani and tells her that she already has two grandchildren and she should be content with her instead of making Patralekha feel bad about not having another child.

Bhavani is sad and tells Virat that both Vinayak and Savi are like cuckoo's eggs which despite resting in their nest can never become theirs.

However, Virat tells her it is only possible when one tries hard enough to make them theirs.

Afterwards, Sai reaches the Bal orphanage to donate Sahiba’s painting that she has asked Sai to give.

As Sai was returning, she finds two nurses trying to make a crying baby stop and offers to help.

In the meantime, the nurses talk among themselves and mention the Garchiroli bus accident which alerts Sai and she asks them what information they have about the accident.

Hearing that there was a child who survived the accident and was brought there and later got adopted raises Sai’s hope and she goes to the manager’s room to find out more about it.

The room was empty and Sai finds a note regarding the Dean’s enquiring about the child of Garchiroli’s accident.

Just then the manager’s assistant comes there and tells Sai that any information regarding this matter can only be given by the manager and she is away on personal business.

© Copyright tellybest.com, 2022, 2023. All Rights Reserved. Unauthorized use and/or duplication of any material from tellybest.com without written permission is strictly prohibited.
Cached Saved on: Wednesday 25th of January 2023 11:33:59 AMCached Disp on: Wednesday 1st of February 2023 09:03:58 PM