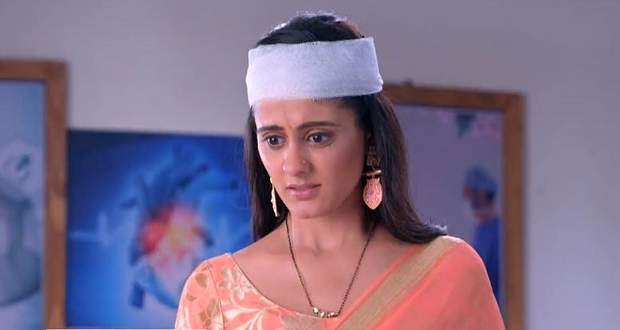 Today's Ghum Hai Kisi Ke Pyar Mein 7th July 2022 episode starts with Virat telling Sai that he will find out who was at Geeta’s house and the attackers but Patralekha was not involved in this.

Bhavani gets angry at Sai telling Virat that Sai is jealous of Patralekha and is not able to see clearly.

Patralekha begins to cry while Bhavani rushes to console her and tells her to be happy and not worry about other people's nonsense talk.

Bhavani warns Sai not to say anything to Patralekha for she will not tolerate anything against her.

Sai tells Virat that soon he will realise his mistake and leaves the room.

After a while, Sai arrives at the Chavan house dejected which worries Ashwini.

Just then, Bhavani also arrives with Patralekha and behaves overprotective of her.

Everyone is shocked to hear that Patralekha is the surrogate of SaiRat’s child.

Virat tells them not to discuss the matter anymore and only concentrates on the fact that Patralekha is the surrogate of his child.

Everyone is curious, but Virat and Bhavani quieten them.

Bhavani also tells everyone that she will not tolerate any misbehaviour towards Patralekha.

Meanwhile, Virat tries to reason with Sai to let go of her anger as there is nothing to be done now.

Sai tells Virat she is not able to let go of her anger because of how she was manipulated and how Virat has gone against her wish and made her indebted to Patralekha.

Virat is also sad because the happiness of their child is lost in all the drama and he is not able to talk about it with Sai.

After a while, Ashwini comes to Sai and consoles her at the injustice she is suffering and asks her to share her grief with her.

Ashwini also tells her to accept what cannot be changed and that now she should start acting like a mother and that means protecting him from anything and everything and always trying to be happy to keep her child happy.

Meanwhile, Patralekha tells her mother that there is nothing to be afraid of as she has closed all avenues from where Sai can find out about her involvement with Geeta.

Later, Ashwini cautions Sai to not feel so hurt that her child’s life gets in danger just like Patralekha’s hatred has caused her miscarriage.

Sai feels scared at Ashwini’s prediction while Ashwini leaves her with her thoughts.

Virat who has come looking for Sai wants to talk to her but decides against it.

© Copyright tellybest.com, 2022, 2023. All Rights Reserved. Unauthorized use and/or duplication of any material from tellybest.com without written permission is strictly prohibited.
Cached Saved on: Wednesday 25th of January 2023 06:36:05 PMCached Disp on: Thursday 9th of February 2023 09:00:44 AM