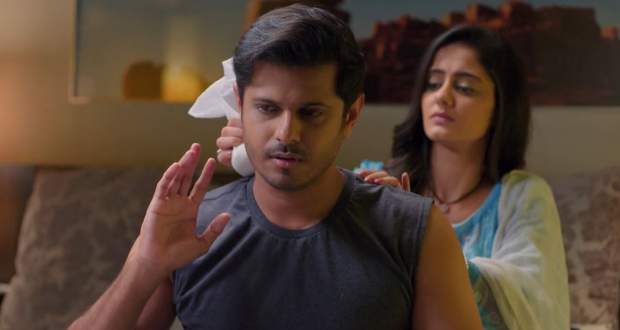 Today's Ghum Hai Kisi Ke Pyaar Mein (GHKKPM) 7 June 2021 episode starts with Virat and Sai getting hypertension with each other’s thoughts as they both get into a heated argument and sleep separately.

In the morning, Sai learns that Virat is sleeping on the sofa and she feels bad about it as she thinks his health might have suffered.

She wakes him up and tells him to sleep in their room or else if anybody sees it might create a problem for them.

Later, Sai massages Virat's back as it pains due to sleeping on the sofa which makes Virat confused about Sai and her feelings toward him.

Virat tries to convince Sai for clearing out the misunderstanding between them but Sai doesn't agree.

On the other hand, the Chavan's taunt Sai for spending Virat's money on her expenses.

Sai stands strong and tells everyone that she is an independent woman and spends according to her budget and isn't dependant on Virat.

But, the argument takes a wrong turn as Patralekha tries to spice up the conversation by letting everyone know that the previous night Virat was sleeping outside their room.

Sai misunderstands Virat and thinks Patralekha was with him the entire night and she was unnecessarily caring about him.

© Copyright tellybest.com, 2020, 2021. All Rights Reserved. Unauthorized use and/or duplication of any material from tellybest.com without written permission is strictly prohibited.
Cached Saved on: Wednesday 9th of June 2021 11:24:46 PMCached Disp on: Saturday 19th of June 2021 12:06:07 PM