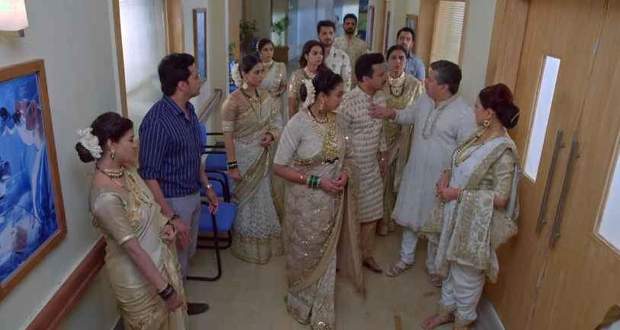 Sai explains Patralekha her past behavior and taunts Patralekha for not understanding the meaning of self-respect.

At the same time, Sai expresses her distress at seeing Virat so helpless and explains her reason to do her best for Virat's quick recovery.

Finally alone with Virat, Sai asks for Virat’s forgiveness and curses the time when he fell instead of her.

Just then Virat regains consciousness and forgives Sai which Sai later realizes is her wishful thinking.

The next morning, Sai talks with unconscious Virat and encourages him to wake up.

Meanwhile, Bhavani enters informing Sai that she has made arrangements to remove Sai from caring for Virat.

Just as Sai was leaving, Virat begins to regain consciousness and asks Sai about her well being and later questions her presence in his room.

To Sai’s disbelief, Virat asks Sai to leave while Bhavani, Patralekha and Samraat returns and find Virat awake. Samraat rushes out with happiness to inform everyone.

Sai tries to cajole Virat but Virat did not budge and rudely asks Sai to leave reminding her of their divorce.