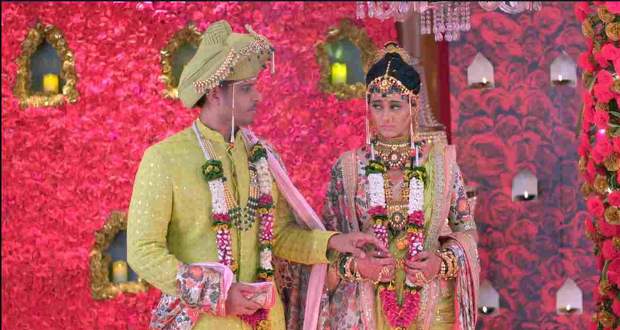 Bhavani scolds Sai and Virat for the preposterous suggestions.

Seeing the outrageous reaction of Bhavani and Omi, Rajeev asks Shivani to not insist and let the matter go for he will also feel awkward.

Samraat and other members agree with Virat and make Rajeev feel welcome.

Seeing the whole family in agreement, Bhavani is forced to agree and make everyone happy.

Afterwards, the whole family is gathered around the bridal couples to perform the post-wedding rituals.

As per the custom, the bride changes their name by adopting their husband's name.

Virat asks Sai to think very carefully before changing her name and Sai tells her that she wants to completely belong to him and become Sai Virat Chavan.

As the Panditji announce the ceremony complete, Virat interrupts him.

Everyone looks at Virat curiously while Virat tells them that he also wishes to change his name.

Questioning the injustice in the custom of changing the name for girls only, Virat announces that he wants to change his name to Virat Sai Chavan.

Virat’s decision is appreciated greatly by Karishma and other youngsters however, the elders disapprove of it.

Bhavani becomes extremely angry with Virat’s decision and tells him that she will not allow him to change his name.

Hearing Bhavani’s disagreement, Virat suggests not changing Sai’s name as well and then there will be no conflict.

Bhavani becomes furious at Virat for putting forward such a condition and accuses him of taking revenge for her condition.

Virat tries to pacify Bhavani and tells her that he is only following the footsteps of his elders in showing his love and respect to his wife and wants to make her feel like his equal.

Mansi tries to convince Bhavani saying that this matter will be inside the house so no one will know about Virat’s doing.

However, Virat tells them that he would be changing the name officially as well.

Virat’s words make Bhavani quiet while others look at him proudly.