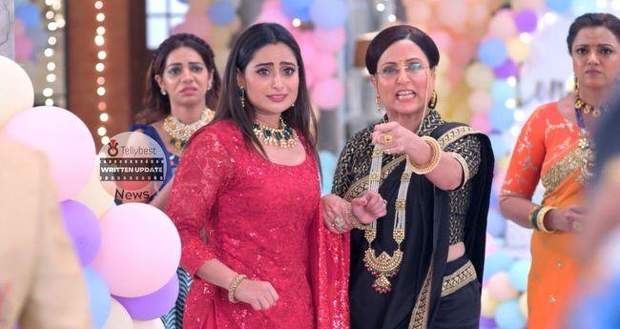 Today's Ghum Hai Kisi Ke Pyar Mein 7th November 2022 episode starts with Virat getting stuck in traffic while he thinks of what to do.

Further, Virat shows his badge to one of the bikers and takes his bike to rush to the bus station.

Elsewhere, Sai drapes a blanket over a sleeping Savi and tells Usha that Savi has a slight fever.

Meanwhile, Virat reaches the bus station and tries to find Sai and Savi while he cries thinking that he has lost them.

Just then, Sai sees him and feels upset while Virat finds Savi's drawing and looks towards the bus to find Sai and Savi.

Virat first climbs the bus and angrily takes the sleeping Savi from there while Sai goes after him and tries to stop him.

However, Virat tells Sai to confess who is the father of Savi and states that a father has the right to know his daughter.

Virat shouts as he asks Sai if Savi is his daughter and Sai finally confesses that he is Savi's father.

The couple starts arguing without logic and starts bringing up the past while blaming each other.

Virat blames Sai for not telling him the truth while Sai asks him if he would have accepted the truth when he was the one who questioned her character.

Sai blames Virat for not even looking for her after the accident while Virat shouts that she was declared dead.

Sai calls him an incapable police officer while Virat blames her for not returning home even after knowing that she is pregnant.

As a final straw, Virat reminds Sai that she is the reason Vinu isn't with them and starts leaving with Savi.

Sai tries to reason with Virat saying that he already has a family while she only has her Savi to live for.

However, Virat tells Sai that he did her funeral rites while she was alive and now she is dead to him even if she's alive.

Virat takes Savi in his car and drives away while Sai shouts in anger that she will not let him take her daughter away.

Usha comes there and cries to Sai asking what they will do while Sai starts calling Virat hoping that he would pick up.

© Copyright tellybest.com, 2022, 2023. All Rights Reserved. Unauthorized use and/or duplication of any material from tellybest.com without written permission is strictly prohibited.
Cached Saved on: Monday 21st of November 2022 01:18:18 AMCached Disp on: Friday 9th of December 2022 03:34:53 AM