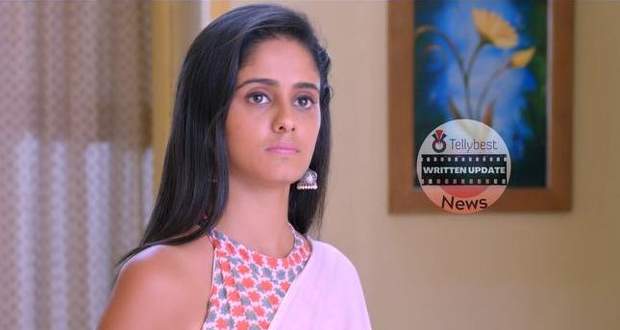 Virat tells her that God has granted him another Vinayak when someone took away his Vinayak from him.

He once again tells Sai to take up the job as these children will benefit from her medical expertise.

After a while, Patralekha observes Virat and Sai re-entering the orphanage together and Bhavani’s premonition seems to come true.

Later, the manager takes everyone to proceed with the inauguration.

In the meantime, Harinee is getting photographed in the club, pretending to be cool model material.

The photographer is flattering her and offers to give her personal classes.

Seeing Harinee smoke, the photographer insists that she try drugs calling it a real deal.

Meanwhile, Sai refuses to inaugurate the wing and requests the manager to bestow the honour on Mrs and Mr Chavan who have been a great help in building this wing.

Just then Virat gets a call from DCP about raiding a club and he leaves.

At the club, the photographer urges Harinee to try the drugs when she hears the police siren and panics.

Seeing Virat in the club makes Harinee hide and run.

Outside the club, Harinee meets Sai in the auto and recognises her.

Sai is happy to see Harinee and asks her why is she so scared.

Harinee asks the auto driver to move and tells Sai that she has come to the club for a photo shoot but suddenly police raid the place and she panicked seeing Virat there and ran.

Sai consoles Harinee and tells her to not be scared if she has done nothing wrong and to tell everything to Virat and he will surely understand her problem and help her.

Harinee continues to panic calling her family names but Sai calms her down and tells her to have faith in Virat.

Meanwhile, Ashwini is complaining about Patralekha and Virat to Bhavani for involving Sai in their life.

Bhavani is scared that Sai will very soon make her way back to the Chavan house and their life.

At the same time, Harinee and Sai arrive outside Chavan's house. Sai becomes nostalgic seeing the house but composes herself.

Sai also tells Harinee to not call her Mami anymore as Patralekha is her Mami now.

Afterwards, Virat sees Sai outside the gate and questions her intentions for coming there.

Hearing Harinee’s name, Virat asks her to not get personal with his family and taunts her for thinking he has feelings for her.

However, Sai reminds him that he insisted on her taking the job for the children's benefit else she would have rejected it knowing his involvement there.

© Copyright tellybest.com, 2022, 2023. All Rights Reserved. Unauthorized use and/or duplication of any material from tellybest.com without written permission is strictly prohibited.
Cached Saved on: Monday 21st of November 2022 07:51:09 AMCached Disp on: Friday 9th of December 2022 04:30:45 AM