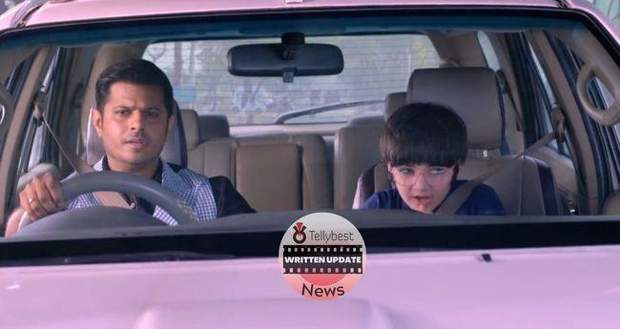 Today's Ghum Hai Kisi Ke Pyar Mein 7th September 2022 episode starts with Virat telling Patralekha that it is alright to give preference to work when she has worked hard for it for years.

Patralekha is grateful for Virat’s support and wise advice while Virat goes on to tell Vinayak that their plan is back on track.

Later, Patralekha and Bhavani see off the Vinayak and Virat with instructions to call.

Meanwhile, Sai tells Savi to not bother Vinayak’s father with her police talk.

However, Savi suggests telling the police uncle to stay in the village so that she and Vinayak can play together.

On the other hand, Patralekha is in business mode and tells her lawyer to prepare the best defence.

After a while, Ashwini comes to cheer up Patralekha while Patralekha tells her that Vinayak is very happy after meeting Savi.

Ashwini also agrees with Patralekha and tells her that sometimes some people become part of our lives without any notice.

On the other hand, Sai also comments on Savi being attached to Vinayak and that it will keep her distracted from asking about her father.

Meanwhile, Vinayak calls Sai to ask for her address but bumps his head and couldn’t hear Sai introducing herself.

In the meantime, Ashwini advises Patralekha to not think of Sai as she will not come back in her life. She also tells her to help Virat change and start their new life with them.

Patralekha also agrees with Ashwini that she has also observed a positive change in Virat and hopes to start their new life together.

Elsewhere, Virat gets shocked to hear Sai’s voice but rejects the idea that it could be Sai.

Just then Savi comes and takes the phone from Sai while someone comes to call Sai.

Later, Usha also feels the voice recognisable while Savi tells Virat to ask for Doctor madam’s house after arriving in the village.

At the Hariya house, Sai is given a surprise from the villagers for giving new life to Hariya’s wife and daughter.

Sai tries to get out of the celebration but Hariya and his wife insist so Sai has to give in.

After a while, Virat and Vinayak arrive at Sai’s house and exchange words with Savi.

On being given a gift, Savi refuses to take it saying her mother has asked her to not accept gifts from strangers.

Just then a villager woman comes to call Savi to join her in celebration at Hariya’s house and invites Virat and Vinayak as well.

Elsewhere, villagers are dancing and merry-making and Sai also join them after a while.