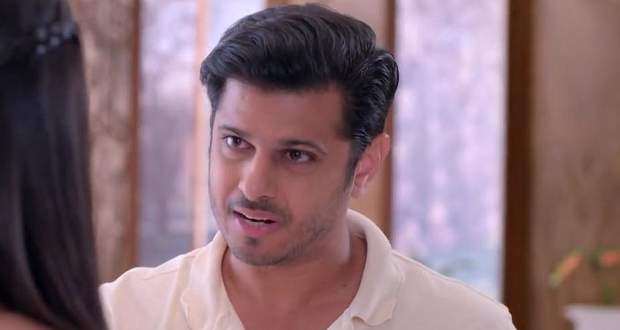 Today's Ghum Hai Kisi Ke Pyar Mein 8th August 2022 episode starts with Sai settling Patralekha to the room while Virat comes into the room telling Sai that both father and son were talking to each other.

Meanwhile, Patralekha wakes up and is happy to see the child born.

After a while, Sai and Virat thank the lord for the child and name their child Vinayak.

Just then, Patralekha comes out of her room and thanks Virat for taking care of her at the time of emergency.

After a while, others also arrive at the house and shower the baby with love and blessings.

Later, Bhavani becomes nostalgic about remembering Nagesh (Bhavani's dead husband) and tells him that Vinayak will bring joy to the family.

Ashwini praises Virat and Sai for delivering the baby safely while other also praises him for being the hero of the hour.

After a while, Ashwini hugs Patralekha with gratitude and tells her that she is ever so thankful for her and blesses her to get all her wishes fulfilled.

Later at night, Virat and Sai are enjoying the alone time with their son who will be sharing their room and their life from now on.

As Sai goes to clean the baby she gets hurt with the broken glass of the frame which they assumed is because of the wind.

Sai expresses her sadness for never expecting to be a mother in future until today.

Virat tells Sai that going forward they will not have any sad thoughts in this room and goes to share his happiness with Kamal saying they are missing him today the most when his daughter has become a mother.

He also jokingly asks Vinayak to ask Sai when is she planning to leave as she had said.

However, Vinayak chooses that moment to spray Virat with pee while Sai takes him from him and goes to wash him.

After a while, Sai brings Vinayak to  Patralekha’s room to feed him and asks Patralekha to move forward in life and become mothers to Vinayak instead of feuding with each other.

Before Patralekha could reply, Ashwini comes in asking to take Vinayak and is disappointed to see him sleeping.

© Copyright tellybest.com, 2022, 2023. All Rights Reserved. Unauthorized use and/or duplication of any material from tellybest.com without written permission is strictly prohibited.
Cached Saved on: Wednesday 25th of January 2023 11:14:48 AMCached Disp on: Thursday 9th of February 2023 07:58:22 AM