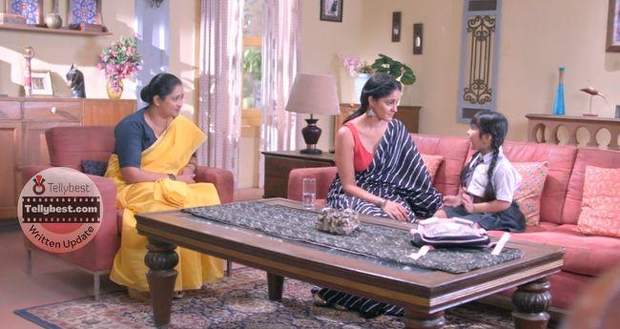 Today's Ghum Hai Kisi Ke Pyar Mein 8th December 2022 episode starts with Patralekha asking Virat who will he choose between her and Sai if he can only save one person.

Virat promises her that he will never let her drown while Patralekha tells him to not make empty promises as he is not good at keeping them.

Virat apologises to Patralekha for not understanding the woman who understands everything about him and his family without even saying it.

Virat asks Patralekha to smile and is about to offer her a glass of water when Vinayak comes crying to him and tells him that Savi will not go to the picnic.

Meanwhile, Patralekha kept waiting for the glass of water which never reaches her hand.

Late at night, Virat calls Sai to convince her to send Savi on a picnic with him if she cannot go.

However, Sai refuses to let Savi go and tells him that he cannot always get what he wants and she has a genuine reason for not going.

She also reminds him that as per the pact he can meet Savi on Sunday and spend as much time as he wishes.

Later, Patralekha tells Virat that she will handle Vinayak and they can plan something some other time.

However, Virat tells her that there is no need to cancel the picnic and they will go together and have fun like before.

Patralekha is weary of trusting Virat again but he assures her that he will keep his promise.

The next day, Virat is getting ready when he turns around to check on Patralekha and gets mesmerised to see Patralekha dressed in the way she was dressed when he first met her.

He praises Patralekha for still looking so beautiful and brings a camera from the cupboard to complete the picture.

Hearing her call Pakhi, Patralekha gets sentimental about hearing her name with so much love after a long time.

Just then Vinayak comes to their room announcing himself ready and stops to see Patralekha looking so beautiful.

Vinayak gets sad to hear that Savi will not be joining them on a picnic but Patralekha and Virat cheer him up and promise to have loads of fun.

Meanwhile, Sai is preparing Modak for Savi like her father used to make for her and tells Usha to get ready as she is going to bring Savi.

After a while, Sai brings Savi to the drawing room wrapped in a bedsheet and unwraps her.

Savi is dressed in Marathi attire with all the embellishments and wakes up as Sai and Usha loudly wish her birthday.

Savi becomes happy to see the place decorated and remembers her birthday.

Meanwhile, Patralekha, Virat and Vinayak come down ready to leave.

Seeing Patralekha dressed differently, everyone admires her and compliments her for looking beautiful while Harini labels her as ‘hot and happening’.

Sonali teases Virat for looking like the father of those two while Bhavani wishes them all happiness and tells them to go and spend time together.

Later, Sai teases Savi for forgetting her birthday while Usha brings her cake.

Just then doorbell rings and Sai opens the door to find a clown standing at the door with his face hidden.

© Copyright tellybest.com, 2022, 2023. All Rights Reserved. Unauthorized use and/or duplication of any material from tellybest.com without written permission is strictly prohibited.
Cached Saved on: Wednesday 25th of January 2023 08:29:06 PMCached Disp on: Sunday 5th of February 2023 02:37:02 AM