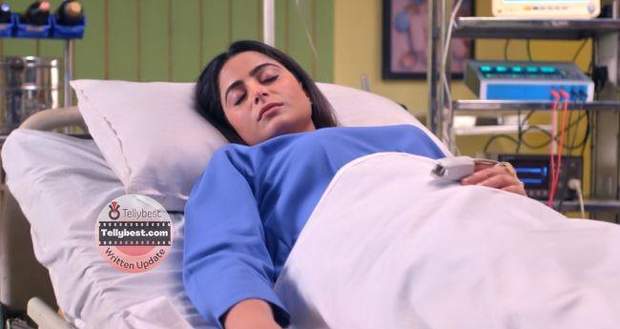 Today's Ghum Hai Kisi Ke Pyar Mein 8th January 2023 episode starts with Sai sending Virat a voice note about baby Vinayak being alive and that she is getting a feeling about their son being alive.

She also tells him that she has a feeling that if she will search for Vinayak then they will find him and maybe just maybe he is alive.

Before sending a sent button, Sai thinks of rekindling Virat’s hope and drops the idea of telling him just yet as he is already worried for Patralekha.

She deletes the message and simply asks for the warden’s number.

Meanwhile, Virat brings Patralekha home where Ashwini welcomes her and tells her that she has arranged her room downstairs.

Patralekha feels sad and useless at not being welcomed by family members with Arti.

Outside Mohit is asking Karishma where she has been the whole time.

Karishma looks at him in shock and asks him if Sai has filled his mind with nonsense.

Mohit gets angry and tells her that she does not need to blame Sai when she is in the wrong.

Karishma taunts Mohit for being spoon-fed by Sai.

Bhavani, Virat and Sonali all ask Mohit what is he talking about.

Mohit has had enough and tells Bhavani that Karishma is having an extramarital affair.

Mohit's words shock everyone while Mohit continues saying he knew about her affair for many days and had given her many chances and warnings to come back from her life of adultery but she ignored it and continues to be in an adulterous relationship.

Karishma becomes angry as well and tells Mohit that he has been following Sai and Patralekha like their tail and was never there when she needed him and that is why she went ahead and made a boyfriend.

Mohit is about to slap Karishma in anger when Virat stops him and berates him for hurting a woman.

Omi also taunts Mohit for daring to raise a hand at a woman instead of keeping his woman in control.

Mohit gets angry at being chastised as he does not think Karishma to be treated as a woman while she betrays him behind his back.

Karishma leaves the hall in anger and returns with a suitcase.

Bhavani warns Karishma to not leave the house or else she can never come back.

Karishma tells her that she has no desire to come back to a house where neither her husband nor his family has any time or attention for her.

Virat tries to stop her saying she should not leave the house in anger and asks her who leaves their house and husband to live with some stranger.

Karishma looks angrily at Virat and tells him that he should not give her a lecture when he has done the same thing years ago when he left Sai to support his ex-girlfriend and later married her.

Bhavani gets angry at Karishma for comparing her situation with Virat's and tells her that they could not let Virat live a lonely life after Sai’s assumed death.

Karishma questions Bhavani about their behaviour when they found out about Sai being alive and reminds her that even then Sai was not given back her status and Virat continues to be with his ex-girlfriend whom he calls his wife now.

Karishma tells him that Sai was right to leave them when her partner was supporting everyone but her and she will do the same today.

Before leaving, Karishma calls the Chavan house a hell and tells them that she has no desire to return to the house or live here ever again.