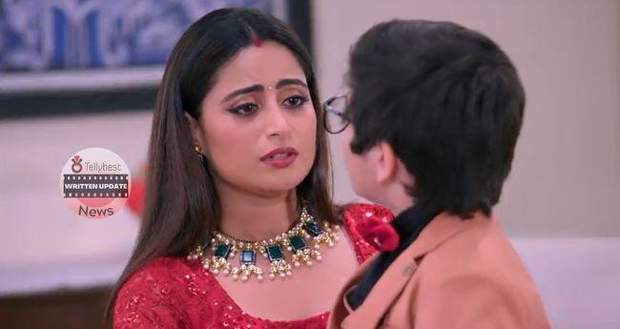 Just then Vinayak came asking for Virat who has not celebrated the party nor did he comply with his wish.

Bhavani gets angry and tells Vinayak that Sai and Savi have left for Kankauli and will not go there.

Sonali instigates Bhavani against Sai and Savi while Bhavani scolds Vinayak for thinking of bringing Sai and Savi to the house and tells everyone that no one will talk about them in the place.

At the same time, Virat comes home with Savi in his arms.

A team of police officers also arrives there.

Meanwhile, Virat instructs his officers to be on their guard and not let anyone come to the house without his permission.

Afterwards, Virat comes inside the house while Vinayak becomes excited to see Savi with Virat.

Seeing Savi in the house angers Bhavani and she asks Virat for bringing Savi home.

However, Virat tells her to keep her volume down as Savi is sleeping and is not well.

After a while, Patralekha comes to the room to ask Virat for bringing Savi home and why is Sai not with him.

However, Virat ignores her question and asks her to bring medicine for Savi that they use for Vinayak.

He also asks her to give him a thermometer which Vinayak goes to get it.

Patralekha looks at Virat who is only worried about Savi.

In the meantime, Sai comes to the Chavan house but is stopped at the door.

However, Patralekha tells her that she has no answer as Savi is not well and Virat is engrossed in looking after her.

Just then Sai’s shouts attract the Chavan's attention and they all come out to see why Sai is making a scene.

Patralekha is shocked to see the police officer obstructing Sai from coming to the house.

The officer tells Patralekha that she is only following Virat’s order who has asked them to keep Sai out.

However, Sai continues to argue with the police to let her take Savi.

Sai once again calls for Virat and tells him to return her daughter while Virat tells Vinayak to look after Savi while he checks up on voice.

Meanwhile, Sai tells the police that Virat has kidnapped her daughter and she is only here to take her back.

Just then, Virat comes there and tells his officers to arrest Sai.

Sai asks him for bringing Savi to the house and keeping her from her mother.

Virat looks at Sai with a blank expression and tells her that Savi is his daughter too and had full rights in keeping her.

The Chavans are shocked to hear the truth. Sai tells him that he cannot keep Savi from her and tells the police to arrest him instead of her.

Crying her heart out, Sai asks Virat to let her be with Savi as she needs her.

Meanwhile, Virat tells Sai that she is being arrested for trespassing, hitting an on-duty officer and attempting to kidnap his daughter.

Sai is shocked at Virat’s decision and begs him to return her daughter to her but it is of no use as Virat goes back inside.

© Copyright tellybest.com, 2022, 2023. All Rights Reserved. Unauthorized use and/or duplication of any material from tellybest.com without written permission is strictly prohibited.
Cached Saved on: Monday 21st of November 2022 12:44:27 AMCached Disp on: Thursday 1st of December 2022 11:16:13 AM