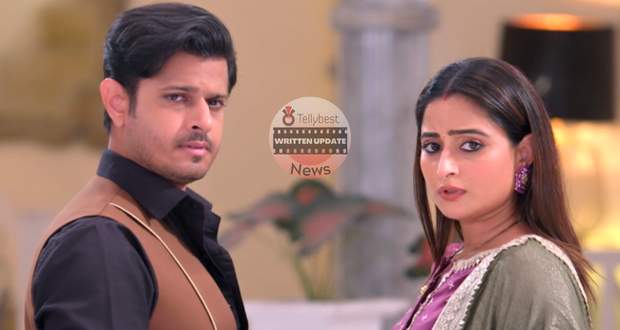 Today's Ghum Hai Kisi Ke Pyar Mein 8th October 2022 episode starts with Sai telling Virat that she herself does not want to come to Chavan House.

Meanwhile, Patralekha and Bhavani also see Virat and Sai together and worry that someday Sai, Virat and Patralekha all stand under one roof once again.

In the meantime, Savi congratulates Sai for getting a new job.

However, Sai’s mood is upset and she tells Usha that the orphanage belongs to the Chavan family.

On the other hand, Patralekha tells Ashwini about Virat showing off their relationship to Sai.

Ashwini tells Patralekha that Virat is going through a bad phase where he needs love and care to come out of it.

Ashwini also tells Patralekha that Sai coming to the Chavan house has caused turmoil in Virat therefore she will have to help Virat come out of it and wisely deal with him.

At night, Virat calls Harinee and asks her if she has something to tell him.

Harinee lies to Virat while Virat questions her about meeting Sai.

Virat gets angry at Harinee for calling Sai “Mami” and tells her that Sai has no relationship with them and it is better to stay away from her.

Just then, Patralekha comes in and tells Virat that if he continues to think about Sai and feels angry then he will only stress himself.

Meanwhile, Usha also tells Sai that she should talk about Virat but Sai refuses to talk about him.

On the other hand, Virat tells Patralekha that Sai’s presence does not affect her but he does not want Sai back in their life.

He also tells her Sai’s chapter is closed from their life.

Elsewhere, Sai tells Usha that Virat has insulted her at Chavan's house gate.

She also requests Usha to stop daydreaming about them.

The next day Patralekha and Virat come down and get wished by their family members.

After that Patralekha and Virat cut the cake and Virat apologises to Patralekha for forgetting their anniversary.

After a while, Vinayak tells Mohit that he wants to invite Savi and doctor aunty to the party.

Bhavani gets furious and tells Vinayak that Sai and Savi cannot come to the party.

Vinayak becomes stubborn and tells them that he will invite Savi to the party.

After Vinayak leaves, Patralekha tells Virat to let Savi come to the party as Vinayak has invited someone for the first time.

She also tells them that it is not wise to drag children into adults fight as it will put a bad impression on their growing minds.

However, Bhavani once again tells Patralekha that Sai will not come to the party.

© Copyright tellybest.com, 2022, 2023. All Rights Reserved. Unauthorized use and/or duplication of any material from tellybest.com without written permission is strictly prohibited.
Cached Saved on: Monday 21st of November 2022 12:27:42 PMCached Disp on: Thursday 1st of December 2022 02:06:54 AM