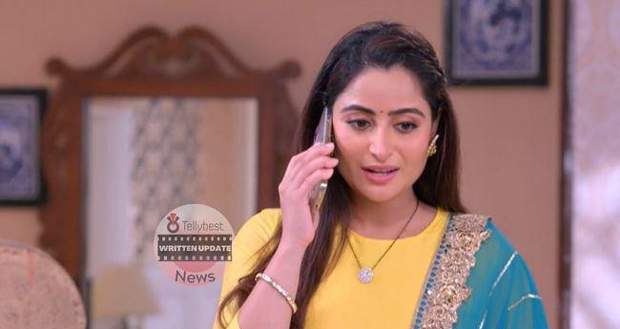 Later, Virat and Vinayak arrive with Savi and other women while Sai is dancing.

Virat is stopped at the gate due to Patralekha’s call while Savi and Vinayak join Sai in dancing.

Meanwhile, Patralekha is asking Virat about reaching safely and whether he is able to meet the doctor.

Virat tells her that they have reached and have come to meet the doctor but he will call her back as there is a lot of noise.

Afterwards, Virat joins the celebration and dances with Savi while Sai's face was turned to another side.

After a while, it begins to rain. Everyone goes inside the shade except Sai, Vinayak and Savi who continues to dance.

As Sai turns to meet Vinayak's father she freezes with shock while Virat looks no different.

Internally Sai and Virat are happy to see each other, while Virat tells her that he should not have believed in her death but should have searched more.

Virat asks Sai why did she not contact him when she was alive whereas Sai tells him that she has left with their son because of him and it was his decision to leave her.

She also tells him that if he wanted to find her then he would have done it as he is a police officer but he never came for her.

However, in reality, they are speechless.

Virat is in shock to see Savi as Sai’s daughter and feels angry at Sai for not contacting him despite being alive.

Sai also assumes that Virat has moved on with his life and feels sad.

The villagers look at them in shocked silence whereas Vinayak keeps calling his name.

Virat comes out of the trans and drags Vinayak with him and leaves.

Savi tries to stop him too but Virat goes on without looking back.

Meanwhile, Virat is driving the car in anger while Vinayak pesters him with questions.

On the other hand, Sai is complaining to Usha about Virat’s rude behaviour despite meeting her after so many years.

Sai is hurt that Virat has behaved badly with Vinayak and Savi.

Meanwhile, Virat is driving rashly and is saved by hair's breadth from crashing his car into a truck.

Not being able to control his emotions, Virat comes out of the car and sits on the ground absorbing the fact that Sai is alive.