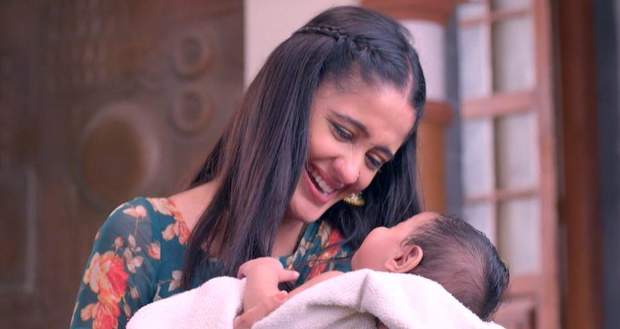 Both Virat and Mohit miss Samraat too.

Seeing everyone becoming tearful, Sai introduces Vinayak to  Samrat and tells him that Samrat would never have wanted them to be sad while remembering him.

Devi ties the Rakhi into Vinayak’s hand and asks to take him in her arms as a gift.

Just then few eunuchs come to seek reward for the birth of Vinayak.

All of them give them a lot of blessings and add to the happiness of the family.

After a while, Patralekha is sidelined by the eunuchs while they give blessings to SaiRat and Vinayak.

They also bless Sai to have another child soon so that they become four.

In her room, Patralekha is trying to attempt suicide while Sai sees her and calls everyone to stop Patralekha from dying.

Virat breaks the door and saves Patralekha while she cries as she is alone and her child is taken away from her as well.

Meanwhile, Sai bottle feeds Vinayak and thinks of Patralekha’s reason for attempting suicide. She is afraid that Patralekha is doing all this to take Vinayak from him.

Meanwhile, all the family members are discussing Patralekha’s suicide attempt and her reason for feeling alone. Karishma adds that Patralekha is feeling this way because Vinayak is handed to Sai after birth.

Just then Sai comes in saying that Vinayak has reached the right place as she is his mother.

Mansi asks them to give Vinayak to Patralekha to be raised by her.

Sai objects to it saying Vinayak is her child while Virat also supports Sai saying that Patralekha can play with the child as much as she likes as he will be in the house only.

However, Bhavani has other plans and tells everyone that Patralekha has become attached to Vinayak and has attempted suicide while feeling depressed.

Sonali asks Bhavani if she means to give Vinayak to Patralekha to be raised by her.

Sai becomes scared to hear this while Patralekha comes in and asks her if it is possible for her to raise Vinayak as a mother.

© Copyright tellybest.com, 2022, 2023. All Rights Reserved. Unauthorized use and/or duplication of any material from tellybest.com without written permission is strictly prohibited.
Cached Saved on: Monday 21st of November 2022 07:03:39 AMCached Disp on: Saturday 3rd of December 2022 02:20:01 PM