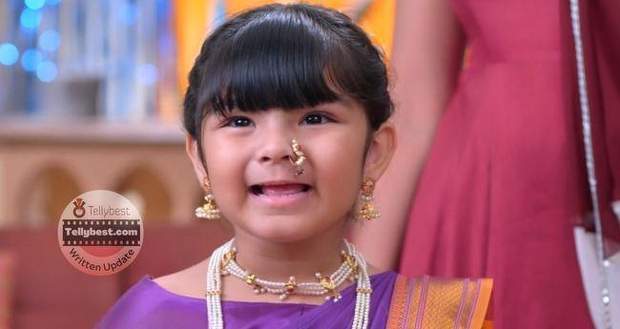 Just then Savi comes there and recognises Jagthap and becomes happy to see him.

Jagthap tells Sai that he has come to celebrate Savi’s birthday and seeks her permission to come inside.

Meanwhile, Savi teases Jagthap calling him her Mama while Jagthap act hurt and runs after her to stop her from calling Mama.

On the other hand, Patralekha and Virat are trying to cheer Vinayak in the car but he continues to be upset and talk about Savi.

Meanwhile, Savi is not happy that Vinayak and Virat are not with her on her birthday and keep talking to Jagthap about it.

Jagthap tries to cheer her with his antics and tells her to cut the cake when the bell rings.

Jagthap opens the door to find Virat standing there who did not recognise him.

Knowing him to be Jagthap, Virat feels irritated and sets him aside to go inside.

Savi gets happy to see Virat and asks him about knowing about her birthday.

Virat is shocked and hurt at being kept out of this and asks Savi to ask her mother why she does not tell this to her father.

Later, Virat tells Savi that he will take her to the picnic where she can celebrate her birthday with her friends and father and Vinayak.

Sai remains quiet at Savi's question about going to a picnic while Virat tells her that she is the birthday girl and can decide for herself.

He asks Savi to go and get changed so they can go on a picnic.

Elsewhere, Ninad opens the door to some delivery guys who have brought a bed for Virat’s room at Ashwini’s behest.

Ashwini tells Ninad that this is her way of bringing Virat and Patralekha together.

Meanwhile, Jagthap suggests Sai to pack the cake for the picnic but Virat gets angry at him and tells him to stay out of their matter.

Virat accuses Sai of celebrating Savi’s birthday with a criminal like Jagthap.

However, Jagthap tells him that it is not Sai’s fault as she did not know about his plan to come there.

Virat insults Jagthap and tells him to get out or else he will beat him to a pulp.

Seeing the matter escalate, Sai asks Jagthap to go and tells Virat that she did not tell him about Savi’s birthday because she does not want Savi to be around people who harbour hatred for her, especially on her birthday.

Virat gets offended and asks her that does she consider Jagthap a better influence on Savi than he and his wife.

He tells her that he will thwart all her attempts to keep him out of Savi’s life and will certainly punish her for daring to hide Savi’s birthday from him.

© Copyright tellybest.com, 2022, 2023. All Rights Reserved. Unauthorized use and/or duplication of any material from tellybest.com without written permission is strictly prohibited.
Cached Saved on: Wednesday 25th of January 2023 05:15:27 PMCached Disp on: Monday 6th of February 2023 04:24:10 AM