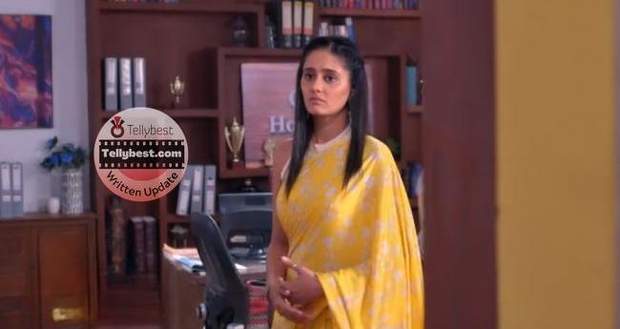 Meanwhile, Sai tells Usha that since yesterday she has been getting this feeling that baby Vinayak is alive and she also heard at the orphanage that there was a child in the accident who survived and is now adopted.

Usha is shocked to hear that and tells Sai to not develop false hopes as it will be very painful for her.

However, Sai tells her that this pain is worth bearing if there is any chance that Vinayak is alive then she wants to find out about it.

On hearing that Sai has asked Virat for the orphanage's warden's number, Usha looks aghast, saying she should not have raised Virat's hope.

Sai tells her that she has not mentioned anything to Virat yet but she desperately wants to find out about Vinayak.

In the meantime, Virat is thinking about Karishma’s words and moments of the past.

Just then Patralekha comes there and asks him if he is thinking of Karishma’s words and is feeling bad that he did not support Sai.

Virat tells Patralekha that he knows he was wrong and that he had done that to her several times and he regrets it too.

However, he tells her to not focus on this for now as it cannot be changed and asks her to rest.

Later, Virat sees Sai’s message and wonders why she needs the warden’s number.

Sai arrives at the hospital when she gets Virat’s call who wants to know her reason for contacting the orphanage warden.

Just then Virat hears Sai asking for the Dean of the City hospital and his antenna gets raised.

Virat decides to divert Sai before she gets to the depth of truth.

Meanwhile, Bhavani scolds Karishma for not knowing about her own son and daughter and is worried that she will not get any votes if people find out that Bhavani cannot control her own family then how will she take care of their problems?

Sonali tells Bhavani that there seems to be Sai’s hand in all this and she is the one who has instigated Karishma.

Ashwini defends Sai but Bhavani believes Sonali and decides to talk to Sai for not staying out of their family matters.

In the meantime, Virat calls the orphanage’s warden Anandi and requests her to not tell anyone about Vinayak to anyone.

Later, Virat tries to call the Dean of City Hospital but his phone does not connect which worries him.

Meanwhile, Sai is with the Dean asking him about the accident.

Before Dean can answer, the peon comes to call him saying someone urgently wants to see him.

Later, Virat asks the dean to not tell Sai anything and asks him to give Sai some information that ends her investigation.

Dean agrees to help Virat and returns to his office where Sai is waiting for him anxiously.

© Copyright tellybest.com, 2022, 2023. All Rights Reserved. Unauthorized use and/or duplication of any material from tellybest.com without written permission is strictly prohibited.
Cached Saved on: Wednesday 25th of January 2023 09:36:17 AMCached Disp on: Wednesday 1st of February 2023 05:46:44 PM