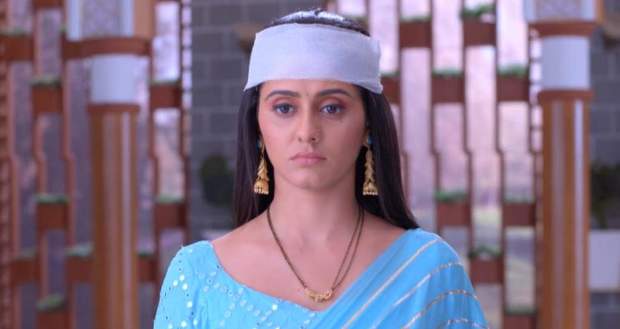 Today's Ghum Hai Kisi Ke Pyar Mein 9th July 2022 episode starts with Virat trying to cheer Sai and is about to have a romantic moment when Patralekha knocks on the door.

Afterwards, Partalekha pretends to cough and asks Sai to get her warm water.

Patralekha asks Virat if Sai and he are happy with her and talks about Samrat saying that he would have treated her like a princess if it were their child.

Virat sympathises with her while Patralekha asks him if she could hug him as she is missing Samrat.

Virat gets puzzled and before he could say anything Sai comes back and hugs him saying she can hug her whenever she mises Samrat.

Later, Sai tells Virat that Patralekha is trying to get his attention and as a woman, she can feel her intentions.

Virat does not agree with her and tells her to focus on Patralekha’s pregnancy.

Meanwhile, Patralekha is wondering about Sai’s behaviour and asks her mother what she thinks about Sai.

Vaishali tells her that she is living in an illusion and when she will realise this it will be too late for her.

In the meantime, Ashwini is expressing her happiness to Sai who tells her that Patralekha will try to get Virat’s attention back.

After a while, Patralekha tells Bhavani that she is not feeling well and wants her checkup done. She asks Virat to take her to the hospital.

Sai tells Ashwini that her suspicions are proving right while Ashwini asks her what she plans to do now.

At the hospital, Sai is waiting for Virat and Patralekha and goes inside with her.

After a while, Patralekha complains to Bhavani of Sai showing up at the hospital while Karishma tells her that as a child’s mother Sai has a right to it.

Patralekha tells her that child’s responsibility is on her and not on Sai.

Sai comes in and questions her for taking the responsibility as she did not ask her that and why was she at the hospital at the crucial time and why was Geeta not there.

Sai tells Patralekha that she is aware of her intentions toward Virat.

© Copyright tellybest.com, 2022, 2023. All Rights Reserved. Unauthorized use and/or duplication of any material from tellybest.com without written permission is strictly prohibited.
Cached Saved on: Monday 21st of November 2022 08:53:25 AMCached Disp on: Thursday 8th of December 2022 02:32:06 AM