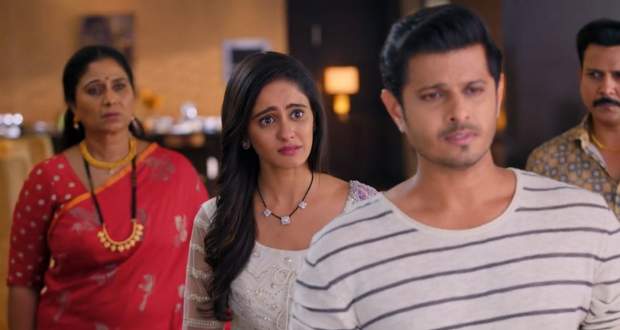 Today's Ghum Hai Kisi Ke Pyaar Mein (GHKKPM) 9 June 2021 episode starts with Sai confronting Patralekha and asking her about the relationship between Virat and her.

Further, Bhavani tries to defend Virat and Patralekha by asking Sai that it doesn't matter if they both had any kind of relationship in between them before marriage.

Meanwhile, Sonali interrupts the conversation and asks Sai why does Virat and Patralekha talking to each other bothers her a lot.

Sai sternly answers everyone that the truth Virat and Patralekha are hiding is lousy and rubbish and people who are supporting them are the same.

Ashwini tells Sai that this matter is to be discussed between her and Virat and not exposed in front of all.

At the same time, Sai puts an allegation on Virat by saying that he told her at the time of marriage that she shall not keep any expectations with him as he is already committed to someone else.

Sai asks Virat to speak up the truth but Virat tells her that whatever she is asking has no value in it.

Afterwards, Sai asks Virat to confirm whatever she's saying is the truth and then she will leave the house forever.

Meanwhile, Sonali says that since she has come to the Chavan mansion she's been saying to leave the home but haven't yet.

Sai looks at Virat and Patrlekha and feels disappointed.