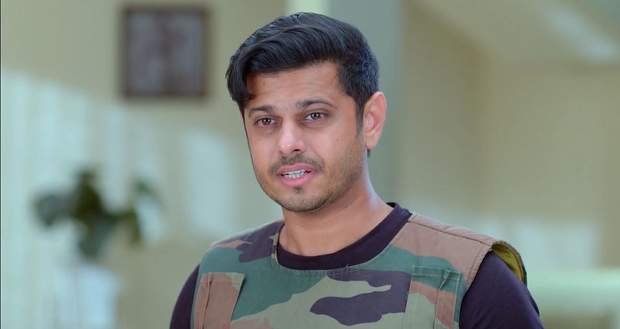 Today's Ghum Hai Kisi Ke Pyar Mein 9th June 2022 episode starts with Virat crying while performing the last rites for Samrat while Ashwini tells Ninad that she can't believe that Samrat is not there anymore.

Bhavani also wails for Samrat for dying at such a young age when it is her time to leave the world.

Meanwhile, Mansi is having an asthma attack while Sai comes to her room and tries to administer the nebuliser.

Mansi is angry at Sai and jerks her hand away blaming Sai for Samrat’s death.

Karishma tells Sai to leave but Sai tells her that she will need to monitor the intake of medicine and requests Mansi to let her do the job for the sake of Samrat.

On the other hand, Virat puts Samrat on fire and they all cry for Samrat.

Afterwards, they all return to the house and sit while Mansi comes to join them.

Sai comes to put a garland on Samrat's photo but Patralekha stops her vehemently.

Sai tries to explain herself while Patralekha stops her and tells her to get away from her so far away from where she cannot see or hear her and never return.

Patralekha is mad with anger and tries to throw her out but Virat comes in between to defend her and requests her to not be so angry that she cannot recognise others' pain.

He explains to her that it was he who has asked Sai to call Samrat because she is pregnant and cannot be left alone therefore she cannot asks Sai to leave.

Patralekha argues with Virat for coming in between Sai and her when he has done the same when Sai has kidnapped Devi to marry her to Pulkit.

Virat tells Patralekha that he was in the wrong then and they all can see how Devi’s life has benefitted from Sai’s decision.

However, Patralekha remains unconvinced and tells Virat that Samrat is dead because of Sai.

Everyone else also tries to make Patralekha see reason and not blame Sai.

Just then Bhavani stops them from taking Sai’s side telling them that the family has lost a son because of Sai.

© Copyright tellybest.com, 2020, 2021. All Rights Reserved. Unauthorized use and/or duplication of any material from tellybest.com without written permission is strictly prohibited.
Cached Saved on: Friday 3rd of June 2022 11:31:22 PMCached Disp on: Saturday 2nd of July 2022 08:08:31 PM