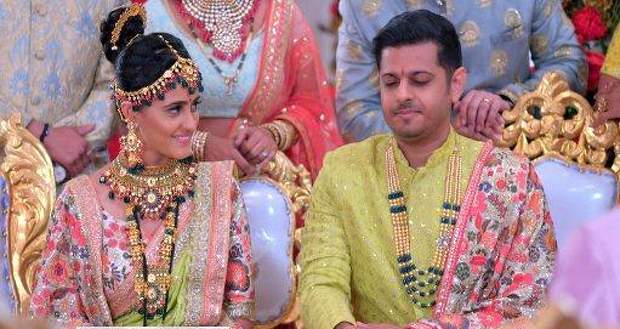 Virat tries to convince everyone again but they use Ninad's absence to stop him from changing his name.

Sai also tells him to not do anything to hurt Ninad’s feelings.

However, Virat shows everyone Ninad’s video message which silences everyone.

Ninad has blessed Sai and Virat for the marriage and has also given his permission to let Virat change his name to express his love for Sai.

Afterwards, he congratulates Shivani and Rajeev on their new beginning and regrets not being with them.

Despite Ninad's blessings, Bhavani still opposes Virat but Virat tells her that he will not change his decision and asks Sai to write his new name on the rice plate.

As a last resort, Bhavani asks Panditji to stop Virat from doing something non-religious.

Panditji tells her that this is a very old tradition and sights example of Sita-Ram and Lakshmi-Narayan, etc.

Bhavani gets angry with Pandit Ji and tells him to go and never return.

Later, everyone celebrates Virat’s victory while Bhavani looks at them angrily.

After a while, Sai and Virat come to their room and are surprised to find it beautifully decorated from corner to corner.

Virat asks Sai about doing this decoration but Sai tells him that it is not her doing.

Just then, Devi and Sunny come in to praise their union and tells them that they deserve the best.

Later, Virat joins their bed that Sunny and Devi have left in place out of respect for their decision.

Seeing Sai happy, Virat admits to her that her love and constant devotion have brought him back from the depth of frustration and pain and he will always be grateful to her for it.