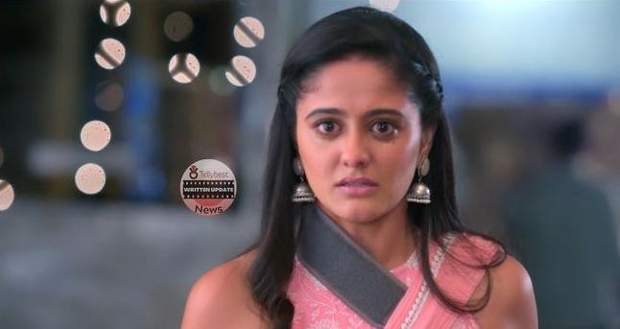 Today's Ghum Hai Kisi Ke Pyar Mein 9th November 2022 episode starts with Sai begging Virat to give Savi back to her but Virat remains immovable and asks his team to take Sai away.

Meanwhile, the Chavans are in shock while Bhavani questions Virat about Savi.

Virat is not ready to answer that but Patralekha also questions Virat about Savi being his daughter.

Virat tells her that it is true that Savi is his daughter.

On being asked, Virat tells Patralekha that Jagthap told him that Savi is his daughter.

Meanwhile, Bhavani refuses to accept that Savi is his daughter and that it was all Sai’s plan to stay in Virat’s life.

Sonali praises Bhavani’s intellect and how she understood Sai’s planning.

Meanwhile, Bhavani berates Patralekha for bringing Sai back into their life and now she will use every means to get back in their life.

However, Virat is unconcerned about what Sai is planning and all he cares about keeping Savi with him.

Bhavani accuses Sai of being of loose character and that Sai might be in relation with Jagthap.

Virat stops Bhavani and tells Bhavani that Sai can be a lot of things but is not characterless and neither is she a liar.

He also tells them that Sai has told him that Savi is his daughter and he believes her.

However, Bhavani adamantly tells Virat that until the DNA report confirms this fact Savi cannot live in this house and she will throw her out herself.

Meanwhile, Virat stops Bhavani and tells her that no one can force Savi out of the house or from his life.

At the police station, Sai is shouting at the police to leave her and let her make a call but no one listens to her and leaves her in the room.

In the meantime, Ninad questions Virat about sending Sai to jail.

Virat tells him that he is punishing Sai for keeping his daughter away from her.

Ashwini also agrees with Ninad and tells him to think of Savi who will ask for Sai.

Virat tells them that once Savi wakes up, he will love her so much that he will forget about Sai and everything else.

Ninad tells him to resolve this matter with calm and by sitting together but Virat refuses to talk to Sai after what she has done to him.

After a while, Virat thinks about several moments in the past with Sai and how Sai confessed to Savi being his daughter.

Later, Savi gets up asking for Sai which makes Virat speechless.

© Copyright tellybest.com, 2022, 2023. All Rights Reserved. Unauthorized use and/or duplication of any material from tellybest.com without written permission is strictly prohibited.
Cached Saved on: Monday 21st of November 2022 08:59:19 AMCached Disp on: Friday 9th of December 2022 03:36:59 AM