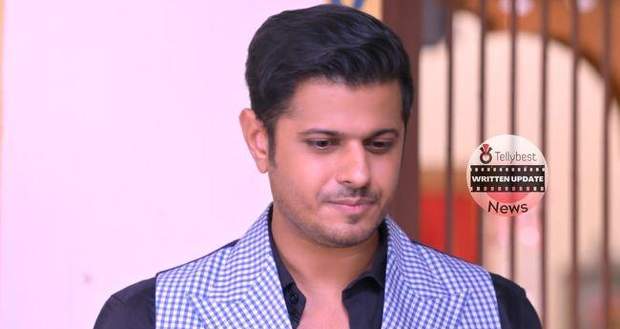 She tells Sai that Virat is not bad and that she will ask him when she meets him why he behaved that way.

Taking Usha's phone, Savi is about to call Vinayak but Sai stops her and scolds her which makes Savi cry.

On the other hand, Vinayak wonders if he should ask his father why he doesn't want to get the treatment done by Sai.

Sai lies on the sofa and cries saying that Virat didn't even look for her and is now living a happy life after moving on.

At the same time, Virat also cries as he recalls trying to look for Sai and becoming a drunkard.

Virat states that Sai does not have their son Vinu with her but instead has a daughter named Savi which confuses him.

At the same time, Sai looks at Savi's baby pictures and is upset that Virat didn't even ask about Savi, their daughter, and is happy that she didn't tell Savi about her father even though she wanted to know many times.

Back at the Chavan house, the Chavan ladies tease Pakhi by telling her that Virat will take her on a trip after he returns.

Further, the ladies tell Pakhi to call Virat and she does.

On the other hand, Sai goes to Savi's room to talk to her while Savi says that she wanted to know why Virat behaved that way.

Usha agrees with Savi and just then, Vinayak calls Savi who picks up the call happily and talks to Vinayak.

Vinayak apologizes to them on Virat's behalf and tells her that he is scared to talk to his father.

Elsewhere, Pakhi gets even more worried as Virat doesn't pick up the calls, and Vinayak's call is busy.

Finally, Virat picks up the call and Pakhi questions him about Vinayak's treatment and why his phone is busy.

Virat fears that if Vinu, talks to Pakhi, Vinu will tell her everything and Virat lies to Pakhi that the treatment will be done the next day.

However, Pakhi still feels uneasy as she thinks that Virat took Sai's name during the call.

The next day, the ladies decide to not have a class today and one lady asks Sai if she knows Virat or is related to her.

However, Sai refuses to know Virat and tells her to leave.

At night, Usha tells Sai to eat as she hasn't eaten anything the whole day while Jagtap comes there.

Sai tells him to leave while Jagtap tells her that he will still be by her side.

Later, Sai reveals to Usha that she's is only worried about Vinayak for now.