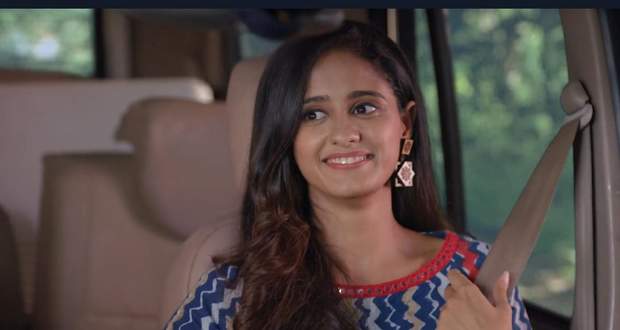 Today's Gum Hai KisiKe Pyaar Mein  10 Nov episode starts with Bhavani asking Pakhi if there is something between her and Virat to which she replies by saying that they are just friends.

Elsewhere, Virat is on his way to drop Sai at her home during which he tells her to smile and gives her the news that she can go back to Nagpur with Kamal.

Sai gets happy hearing the news after which the two share a happy moment and he drops her home.

Sai enters the house and looks at Lord Ganesha's decorated temple while Kamal greets her from behind and Usha also joins in after which the three celebrate her homecoming.

Kamal oils Sai's hair after which he gives the holy thread he wore for her while Usha reminds them that there is Poornima pooja in the evening.

Sai takes a promise from him to not get involved in the case anymore which he informs her that he has to reach the police station to sign his documents.

At the Chavan mansion, the family is having lunch in candlelight while Mohit is inquiring on the phone about the power cut.

He states that the food is Samrat's favourite and everyone gets emotional remembering him while Bhavani imagines Samrat being present with them after which she leaves the dining table.

At the police station, Virat gets a call from someone informing him of Jagthap's location and disconnects call when the former asks his name.

Virat discusses the plan to officers while Kamal says that he wants to join them in the plan but Virat refuses and tells him to go home.

Further, Kamal asks him to give permission to join as Gurudakshina and he agrees.

© Copyright tellybest.com, 2020, 2021. All Rights Reserved. Unauthorized use and/or duplication of any material from tellybest.com without written permission is strictly prohibited.
Cached Saved on: Thursday 28th of January 2021 02:49:09 PM