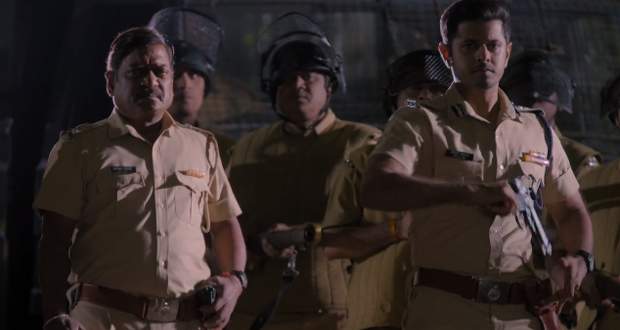 Police Jeep's are going to Jagthap's location while his goons are camouflaging a pit with leaves.

At the Chavan mansion, Ninad gives Bhavani medicines for her headache after which she tells him her concern of Pakhi getting Samrat's money and not Mansi while Ashwini comes there.

Ashwini starts criticising him. Further, when Bhavani confronts her she says that she doesn't want Virat to be with her sister-in-law but Ninad stops her mid-sentence.

Elsewhere, Police jeep reaches Jagthap's location and falls into the pit after which he and his goon start firing at it but a goon reveals that the jeep is empty while Virat watches them.

Sai gets worried for Kamal and calls him but he doesn't pick up. Other officers reach the location and start open firing at Jagthap and his goons after Virat's command.

Sai calls Kaale and hears gunshots while the call gets disconnected. Kamal runs to Jagthap and fights with him while Virat orders to stop firing.

Jagthap takes Kamal's gun and puts it against Kamal while Virat hits him and tells him to surrender.

However, Jagthap throws dirt at him and fires at him but Kamal takes the shot while Sai witnesses the scene. She runs to save him while other officers arrest Jagthap.

Sai tells Kamal to keep his eyes open while Virat tries to console her but she swats his hand away after which Kaale takes Virat's side.

© Copyright tellybest.com, 2020, 2021. All Rights Reserved. Unauthorized use and/or duplication of any material from tellybest.com without written permission is strictly prohibited.
Cached Saved on: Friday 6th of August 2021 03:01:17 AM