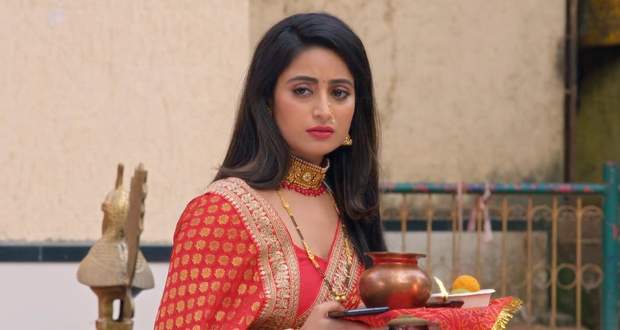 Today's Gum Hai KisiKe Pyaar Mein  16 Nov episode starts with Usha telling Virat to take Sai with him to his home while Virat tells that there is no way it can happen.

Usha tells him that there is a way and that is by marrying her while Virat opposes it.

Suddenly, Sai appears from behind and says that it will not happen even if he's the last man on earth.

Further, she says that she can take care of herself and rushes to her room where she cries hugging Kamal's frame.

Suddenly, she faints and falls while her saree caught's fire and other ladies put it out.

Virat goes after Sai and knocked on her door while she mistakes him for Usha after which he introduces himself.

Pakhi regains consciousness after which Karishma gives her a glass of water but Bhavani throws it away and scolded her.

Meanwhile, Sai tells Virat to go away but he asks for just five minutes times and tells her the truth of the death Kamal but she doesn't believe him.

He further tells her about the promise he made to Kamal after which she cries hugging Kamal's frame.

They argue after which he writes his Nagpur address on a notepad and tells her to contact him if the need ever arises but she says that that day will never come.

Virat says that future is unpredictable and Sai stops him.

© Copyright tellybest.com, 2020, 2021. All Rights Reserved. Unauthorized use and/or duplication of any material from tellybest.com without written permission is strictly prohibited.
Cached Saved on: Friday 6th of August 2021 02:03:09 AM