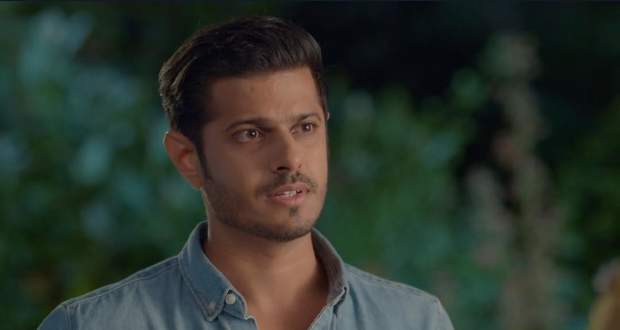 Today's Gum Hai KisiKe Pyaar Mein  17 Nov episode starts with Sai stopping Virat and apologizing to him after which he leaves.

Further, Virat is packing his bags while he comes upon the dried rose that Oakhu gave him and remembers her while the rose caught's fire.

He saves the rose and puts it back in the diary.

Meanwhile, Sai is looking at Kamal's photo album and cries to herself while reminiscing her childhood memories after which she imagines Kamal telling her to smile.

Later, she sees multiples of Kamal and they start to vanish while one says that he is here to take her with him.

She screams while a window breaks due to the heavy wind and the glass prices fall into her room.

At the Chavan mansion, Bhavani is complaining about Pakhi to Vaishali while the latter replies that it might be because of her worry for Samrat.

Vaishali thanks Bhavani for inviting them thereafter which the ladies perform their rituals to break the Savitri Vrat with their husbands but Pakhi does the rituals with Samrat's photo.

Elsewhere, Sai is writing on a notepad that she is willingly ending her life after which she picks up a glass piece and slits her wrist and later she falls unconscious.

Usha knocks on her door but gets no response after which she sees blood coming from her door and calls Milind and other.

Pawar breaks her door and they see an unconscious Sai and rush to her.

Meanwhile, Virat is telling the police officer to take care of Sai after which he leaves for Nagpur.