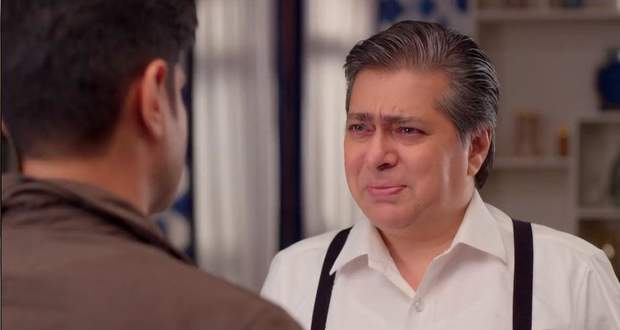 Today's Gum Hai KisiKe Pyaar Mein  10 Oct episode starts with Ninad revealing the truth about his retirement to Virat. He informs Virat that he lost three of his Jawaans in a sudden battle.

Ninad further tells him that one of his Jawaan took the bullet on himself to save his life and that’s why he took early retirement because of his regret of not been able to save the Jawaan.

He asks Virat to not to be a coward like him and to be brave like his uncle ACP Nagesh Chauhan.

Later, Virat gets ready to leave for his duty, while Devyani hugs him and asks him to find a husband for her.

Virat reaches his police station and witnesses a constable not paying the auto fare. He says to the auto driver that all police officers are not the same and pays the money to him.

Pakhi gets angry with her mother for inviting Samrat’s family to see her. Pakhi’s friend arrives there and questions Pakhi about Virat.

Pakhi makes a call to the resort and asks for Virat’s number, while Virat sees everyone rushing to welcome the new IPS.

He gets the money of the auto fare from the constable and introduces himself as IPS Virat Chauhan. He orders the inspector to get the suspension letter of the constable for misusing police job.

The inspector takes Virat to his quarter and informs him that there is a function for his welcome in one hour. Virat thanks him and calls him his inspiration who trained him to be an IPS officer.