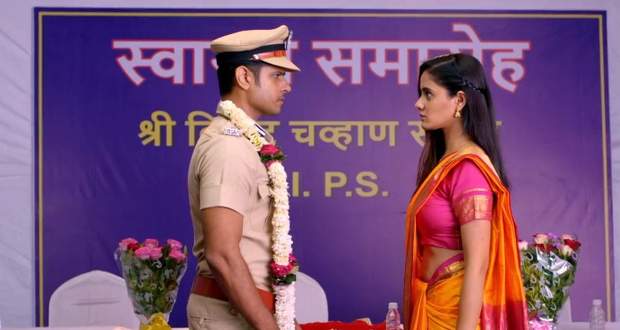 Virat calls Sunny to find Pakhi’s contact number from the resort. Later, Sai gets shocked to see Virat Chauhan as the same person who threw mud on her.

Virat gives a welcoming speech in the function and asks Kamal to postpone his retirement. Sai gets angry when Kamal accepts Virat’s request.

Sai is called on the stage to be awarded by her father Kamal and is asked to welcome ACP Virat.

Pakhi makes a call to Virat, while Virat disconnects her call. Pakhi calls him again and Virat responds to her like an unknown person.

Sai and Kamal reach home, while Sai is upset with Kamal for postponing his retirement. Meanwhile, Pakhi is hurt when she realizes that Virat doesn’t even save her number.

Virat gets a call from Sunny and he informs Virat that he got Pakhi’s number. He tries to call Pakhi but his contact was blocked by Pakhi.

Sai rushes to meet Virat at his quarter and notices Jagthap and his men meeting Virat. Jagthap welcomes Virat in Garchiroli and gifts him a new cell phone.

Virat puts the gifted mobile phone in the flower pot and asks them to water it. He warns Jagthap to not bribe him ever in a lifetime.

Elsewhere, Pakhi’s mother scolds Pakhi for not taking the right decision for her love life. Her father asks her to forget about Virat and to meet Samrat for marriage.