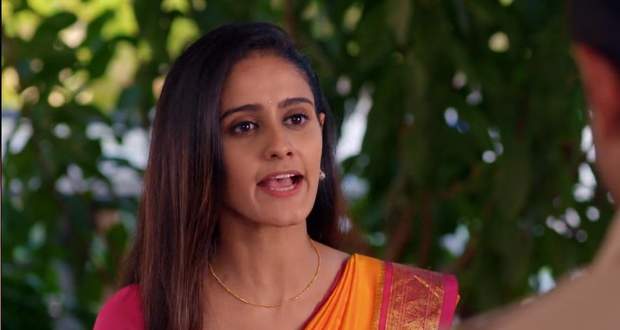 Today's Gum Hai KisiKe Pyaar Mein  13 Oct episode starts with Sai bursting out her anger on Virat for postponing Kamal’s retirement. Virat gets angry with Sai for behaving badly with him.

Sai asks him to arrest Jagthap and Vithal for assaulting her, while Virat asks Sai’s Maasi to take Sai with her otherwise he will take strict action against her.

Samrat and his family go to meet Pakhi, while Samrat’s family questions Pakhi about her hobbies. Pakhi remains silent and doesn’t speak anything.

Virat tries to call Pakhi but feels strange when he is not able to connect to her. He drops a message to Pakhi to call him back when she sees the message.

Samrat tries to begin a conversation with Pakhi but Pakhi remains silent. Samrat asks her if she is not ready for the marriage.

He tells Pakhi that his family likes her a lot, while Virat’s mother tells Virat to call Samrat and to congratulate him.

Virat then makes a call to Samrat and questions him about the girl. Samrat praises Pakhi and tells Virat that the girl is very decent and simple.

Pakhi’s father arrives there and tells Samrat that his family is waiting for him. Pakhi shares with his father that she cannot believe that Virat doesn’t like her.

Her father asks her to choose wisely and Pakhi says yes to marry Samrat. Elsewhere, Virat informs Kamal that Sai came to meet her about his retirement. Kamal apologises to Virat for Sai’s rude behaviour.

He tells Virat that Jagthap assaults Sai and once he arrested Jagthap for his deed. Elsewhere, Jagthap tries to molest some girls and Virat arrives there to teach him a lesson.

Jagthap warns Virat to not to interfere in his matter and tells him the power of his father Vithal.

© Copyright tellybest.com, 2018, 2019, 2020. All Rights Reserved. Unauthorized use and/or duplication of this material without written permission from tellybest.com is strictly prohibited.
Cached Saved on: Wednesday 28th of October 2020 05:33:16 PM