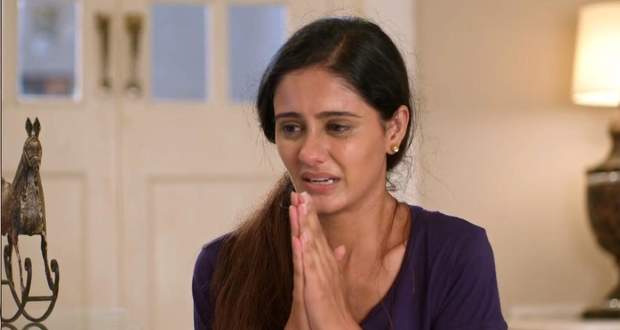 Today's Ghum Hai KisiKe Pyaar Mein  16 Oct episode starts with the principal inviting Sai to come on the stage to get the trophy from ACP Virat.

Samrat and Pakhi get engaged in the presence of their family members, while Samrat gives a speech in the school as the chief guest.

He indirectly taunts Sai in front of everyone for being so arrogant. Meanwhile, Ashwini tries to call Virat but he doesn’t pick her call.

Sai leaves from the school without informing Virat, while Jagthap waits for Sai to kidnap her. Virat requests Sai to stay at home till her father returns home. He appoints two constables at Sai’s house to take care of her in the night time.

Later, Sai gets a message of her father’s ID card. She calls back on that number, while the person tells her that her father met with an accident.

Sai rushes to see her father, while Sai’s mausi and the constables follow her. Jagthap kidnaps Sai and takes her to his home.

Sai throws the things at Jagthap, and Vithal shouts at her to not to ruin his belongings. Jagthap locks Sai in the room and she keeps on shouting for help.

Elsewhere, Virat’s Taayiji prays to God for her family’s well being. Virat and Samrat take blessings from her, while Virat congratulates Samrat for his marriage.

Kamal reaches his home and questions the constables about Sai’s kidnapping. Usha informs Kamal about the scene when Jagthap kidnapped Sai.

Further, Pakhi gets ready for the Mehndi ceremony but keeps on missing Virat every moment. She applies Mehndi on her hands and her father asks her to keep smiling.