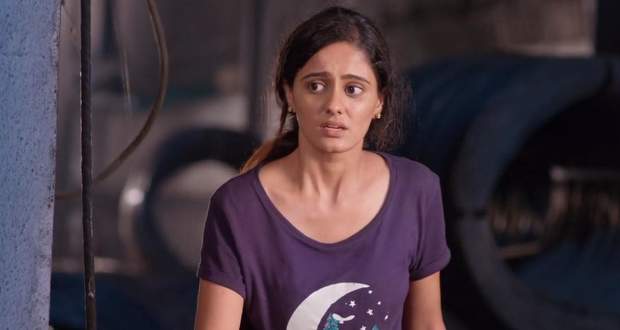 Today's Gum Hai KisiKe Pyaar Mein  19 Oct episode starts with Vithal making fun of Kamal for not been able to find Sai in his house. He lies to him that Jagthap is not at home from the last 2-3 days.

Pakhi apologises to Virat for blocking his contact number. She asks him to tell their family about their relationship.

Pakhi expresses that she cannot think about any other guy other than Virat. Pakhi’s mother arrives there and asks Pakhi to come downstairs. Pakhi tells her that Virat is the same guy whom she met in Nasik.

Sai tries to escape from Vithal’s godown and falls down in Jagthap’s arms. He expresses his love feelings to Sai, while Sai requests Jagthap to leave her.

Pakhi tells her parents that she loves Virat and cannot marry Samrat to spoil her life. Pakhi’s father asks Virat to take the right decision for a better future.

Virat tells Pakhi’s parents that he cannot break his brother’s heart for Pakhi. He asks Pakhi to forget everything and to move on with Samrat.

Virat tells Sunny that it is not Pakhi’s fault and it is his destiny to not get his love. He cries out loud on losing the love of his life to his brother Samrat.

Jagthap and his men get into the godown and Sai act to be in sleep in front of him. Jagthap goes out to attend a call and Sai gets his phone kept next to her.

She tricks Jagthap and finds a scooter outside the godown. Elsewhere, Pakhi’s father asks Pakhi to take the right decision for her life.

Pakhi’s mother scolds Pakhi for thinking to call off her wedding with Samrat, while Sailesh takes a stand for Pakhi and supports her in her decision.

© Copyright tellybest.com, 2018, 2019, 2020. All Rights Reserved. Unauthorized use and/or duplication of this material without written permission from tellybest.com is strictly prohibited.
Cached Saved on: Thursday 26th of November 2020 09:38:35 AM