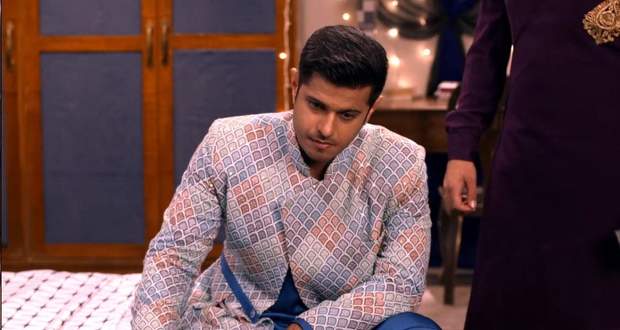 Today's Gum Hai KisiKe Pyaar Mein  20 Oct episode starts with Kaaku waiting for Pakhi and her family in the Sangeet function. She asks someone to make a call to Pakhi’s mother.

Ninad asks Kaaku to not to get angry with Shivani for inviting her boyfriend. Kaaku taunts Shivani, while Shivani gives a bold answer to her.

Samrat asks Virat if he liked her Bhabhi or not. Samrat gets uncomfortable but still tells him that he looks good with Pakhi.

Virat’s mother asks Virat and his friend Sunny to get ready for the function. Virat is heartbroken on thinking of Pakhi getting married to Samrat.

Meanwhile, Sai runs away from the godown on a scooter, while Jagthap and his men rush to catch her. Sai stops in her way when the scooter gets out of petrol.

She sits inside a truck and makes a call to her father through Jagthap’s phone. She gives her location to him and asks him to rescue her near the Shiv Mandir.

Pakhi’s family asks her to start a new life with Samrat. Chavan family welcomes Pakhi and her family to their house.’

Later, Ashwini witnesses Virat getting emotional and assures him that she will get him married to the girl he loves.

Virat refuses to attend the function, while Karishma feels something weird about Virat and Pakhi. Meanwhile, everyone praises Pakhi and Kaaku questions her that why she got late in coming.

Pakhi’s mother tells her that they got late because of the traffic. Further, both the families dance and enjoy the Sangeet function together.

Samrat asks Pakhi to promise him in finding Virat’s girlfriend. He tells her that Virat is an excellent drummer and asks Virat to give a performance.

© Copyright tellybest.com, 2018, 2019, 2020. All Rights Reserved. Unauthorized use and/or duplication of this material without written permission from tellybest.com is strictly prohibited.
Cached Saved on: Saturday 28th of November 2020 04:55:48 AM